Learn how lasers are used for paint removal and surface removal (the process that peels the film or plating from a target).

Laser removal involves removing the surface coating of a plastic in order to expose the base material or coating underneath. In the shift lever processing example below, the black coating on the plastic was removed to allow light to pass through to the colored material underneath. Laser-based paint removal is useful for exposing multiple layers of plastics (such as black, red and green coatings). 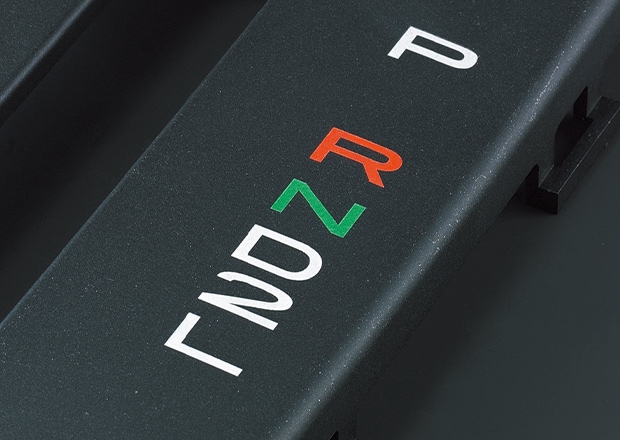 Creating contrast on vehicles switches is usually done one of two ways: either the desired contents are printed on top, or the paint is removed with a chemical or removal agent. However, the former method requires custom printing plates for each mark, while the latter method involves expensive chemical consumables. Laser markers make this application simple because they can simply peel the paint off the part via laser irradiation. Cars with illuminated switches are becoming much more common. As a result, laser markers are being rapidly adopted thanks to their ease-of-use.

YVO4 laser markers have a high peak power and short pulses, which enables momentary, high-energy irradiation of a target. This allows for detailed finishing edges without any heat being applied around the processing location. As a result, high-quality processing is possible even on design surfaces.

High-quality processing is possible for design surfaces with detailed edges.

Surface removal is a process in which the coating, plating, or other surface layer of a target is peeled in order to expose the underlying material. In reference to paint removal—where the film coating is removed—any application where plating or other coatings are removed can also be referred to as surface removal. As shown in the figure below, a grounding point is created by removing the alumite surface layer (insulating layer). Attaching ITO film (transparent conductive film) to a glass substrate is an essential step in manufacturing flat panel displays. Chemicals are generally used for wet etching patterns. However, using such chemicals can require equipment investments and running costs. Laser markers can perform the same job with no overhead costs (in this case removing film around a circuit). 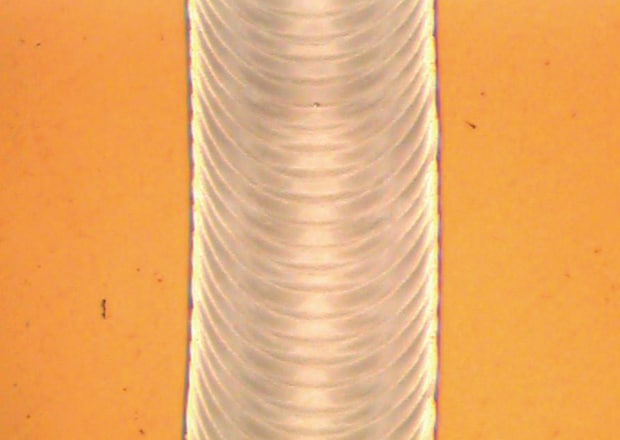 High peak-power, short-pulse YVO4 laser markers can perform surface removal without damaging glass/film and with no increase in turbidity. Since no chemicals were used for this process either, running costs can be kept low and any expansion/contraction of the film due to moisture can be prevented. Compared with wet etching, laser processing is an inexpensive alternative that does not require a lot of space. Capital investment can therefore be determined by production quantity.

Lasers can also be used to peel gold plating off of connector terminals. The goal of this process is to prevent the solder from rising up. Connectors used to require masks in order to prevent unnecessary plating, but the connectors themselves continued to get smaller and fine-pitched. Eventually, post-processing via laser markers became a popular alternative.

Creating a nickel barrier is a technique that creates an area with low solder wettability between the PCB mounting and contact points. The creation of this area prevents solder rise up and reductions in joint strength.

Support for complex 3D shapes through 3-axis control
KEYENCE's Marking Builder software makes it possible to import the 3D CAD data (STL format) of a marking target and use it as the base of a program layout. This enables users to perform laser etching on targets with complicated profiles that cannot be expressed with basic shapes (such as cylinders and step height changes). 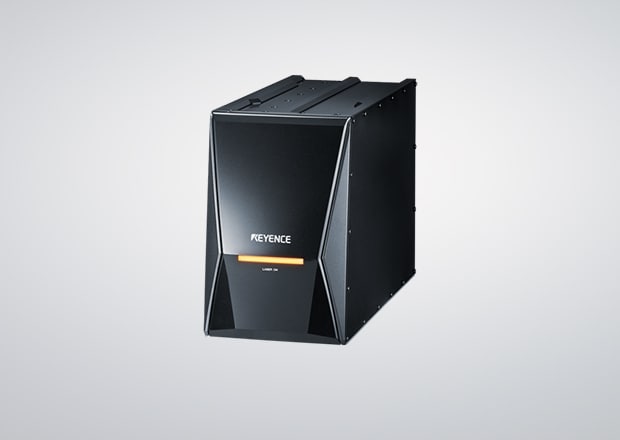 General support for metal and plastic