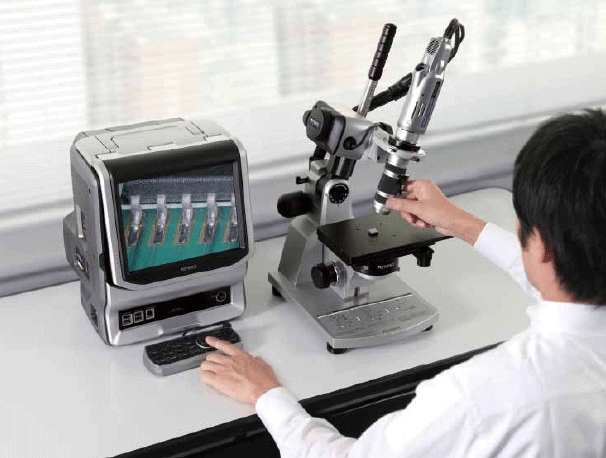 Large depth of field for vivid and sharp 3D observation

The VW-9000 Series provides a depth of field at least 20 times larger than optical microscopes. Because of this, the VW-9000 Series can accurately observe the surface topography of a target with large peaks and valleys; imaging that is typically impossible for conventional optical microscopes to achieve. Furthermore, the number of steps required for observation and focus adjustment can be reduced considerably.

Observation at all angles

The VW-9000 system provides both easy handheld operation and simplified standmounted observation. Considerably reduce the time it takes to capture images of a target at a wide variety of angles and positions by using the Free-angle observation system. Using these two methods of observation, you will never again miss a detail in your observation.

The advanced high performance graphics engine allows you to capture images in 16-bit gradation through RGB data from each pixel, instead of conventional 8-bit data. This enables target profiles to be accurate in a way that is not possible with conventional systems. Furthermore, the obtained images are stored as 16-bit data, allowing you to more acutely observe images as needed.

The camera captures multiple color images of varying brightness by automatically adjusting the shutter speed, and then produces an image with a high level of gradation data. Since the range of obtainable brightness levels has been widened, accurate representations of targets with glare, as well as detailed images of areas with low color gradation can be rendered.

Can Easily be Used by Anyone 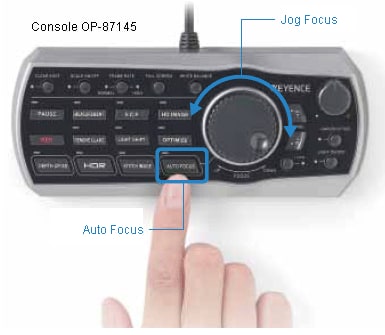 Combined with the Z-axis motorized stage, automatic depth composition and 3D display are possible with just the push of a button on the console. In addition to shortening observation time, this also eliminates human error in 3D image construction. 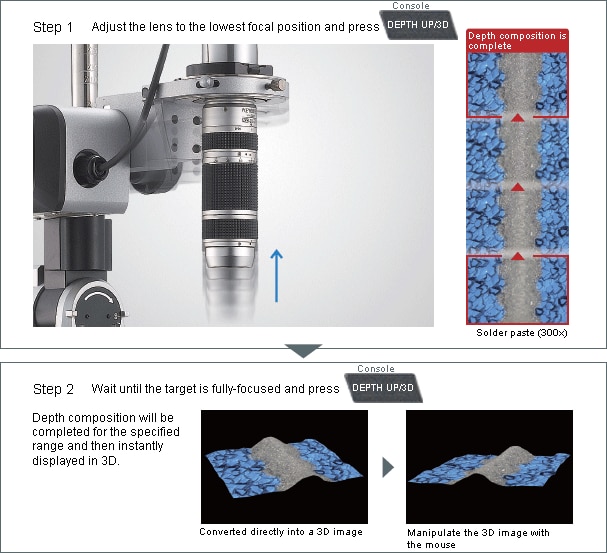 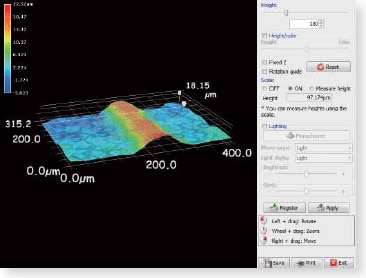 Provides a scale and height/color map on 3D images. The color scale allows users to easily visualize different heights on a surface with varying topography.

Several measurement tools are available to provide quantitative data on any two-dimensional image taken with the VW High-speed Microscope. Measurements can be easily performed by just clicking on the desired points on an image or by having the system automatically extract the areas of interest.

The distance between two points on the screen can be measured by specifying the points with the cursor.

The radius of the circle can be measured by specifying three points on the circle.

Specify three points on the circumference of two separate circles to find the coordinate of the center of the circle. The distance between the centers of two cirlces can be measured by specifying two circles sequentially.

The shortest distance (perpendicular line) between a line specified by two points and another arbitrary point can be measured.

The shortest distance between two parallel lines can be measured by specifying two points that draw a line and another line parallel to the first line.

The angle determined by three selected points on the screen can be measured.

A bar, mesh, cross and other various shapes can be displayed as a scale. These can be conveniently used as the reference scale for simplified measurement or for printing the images.

Recognizes the current lens and magnification being used. This eliminates the need for calibration when changing magnification.