Installations of handheld computers are progressing in a variety of fields such as logistics and manufacturing with applications including inventory management, data verification, process management, traceability, and shipping mistake prevention. This section explains the environment that is required in order to actually install handheld computers. 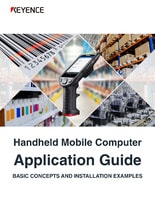 The advantage of a handheld computer is its ability to perform multiple functions as a standalone device, filling many roles such as reading various codes as well as collecting, sending, and receiving data. However, before handheld computers can be installed, it is necessary to organize the surrounding environment.

The necessity of preparing both hardware and software

For operation, a variety of equipment is necessary. Examples include the PC or server to communicate with, the battery that supplies the power and the dedicated battery charger, and the dedicated printer used to output the recorded data. It is also necessary to develop software to provide system functions and operability that match the usage environment and the purpose. Examples of issues handled by software include how to aggregate and process the data and how to display the aggregated data on a PC or similar device. Hence, it is important to thoroughly consider the peripheral equipment and the environment, including hardware and software, prior to installation.

Handheld computers can read and accumulate data in a standalone manner, but integrating these devices with PCs and servers is essential in aggregating data, sharing data with different departments, and making use of data from other departments. The problem is determining which method to use to communicate between handheld computers and PCs/servers. The answer is determined by the usage environment and generally is selected from one of two options: using a communication unit and using a wireless LAN.

Use a communication unit when the usage location is limited

Use a wireless LAN in large warehouses, stores, and factories

If you want to use handheld computers while moving throughout a large warehouse, store, or factory, select the wireless type. It is necessary to build an on-site LAN by installing dedicated access points. When building an environment with a wireless LAN, it is often the case that the handheld computers are used over a wide range, so measure the environment and determine the number and installation locations of the access points required to match the operating environment.

Printers and Other Peripheral Equipment

One common thing that is seen is home delivery drivers printing off data when delivering packages. An advantage of handheld computers is that in addition to being able to read and aggregate data, they can print off data by connecting a printer. A separate printer is required in order to print labels with data read in a warehouse or factory and affix these labels to cardboard boxes and to issue barcodes for shipping. Compact, portable printers that can be used with handheld computers are also available, so use these printers to match the application.

The development of dedicated software is more difficult than establishing the hardware environment that includes the handheld computers and peripheral equipment such as communication equipment, batteries, and printers. This is because system construction such as determining how to aggregate and process the read data and how to implement on-screen operations are essentially the domain of system engineers. Naturally, the development costs during hardware installation require a large investment. There is no shortage of cases in which operators want to install handheld computers to make work more efficient but run into the bottleneck of software development and are unable to reach their expected efficiency.

The handheld computer installation conditions vary depending on the specifications and on whether a corporate system is present, but the development methods can generally be separated into the four listed below.

With this pattern, the application to execute is embedded in the handheld computer. This is the optimal method for corporations that want to accumulate data, implement rich device control, and develop applications easily.

With this pattern, the browser on the handheld computer accesses webpages on a web server. This is the optimal method for corporations that want to use or are already using web applications and want to manage applications in a centralized manner.

This pattern uses third-party terminal emulators/middleware. This is the optimal method for corporations that want to create a fast and rich web system, use AS/400 and SAP emulators on handheld computers, and manage applications in a centralized manner.

Selecting the development method according to needs

WebWe want to use web applications.

MiddlewareWe want to create a fast and rich web system.

EmulatorsWe want to use AS/400 and SAP emulators on handheld computers.

When using handheld computers, there are different software development methods such as embedded applications, web applications, terminal services, and terminal emulators/middleware. However, all methods incur development costs and have their own delivery dates. KEYENCE's development tools solve this problem and make it possible to more easily develop dedicated software on your own.

The greatest characteristic of these tools is their simple visual development. Anyone, even people with absolutely no knowledge of difficult computer languages, can develop dedicated software just by selecting the required functions, icons, and other such items from the rich templates and GUI (graphical user interface) tools displayed on the PC screen. This eliminates waste by reducing the hassle, cost, and time required to order development from dedicated vendors and engineers. What's more, systems can be developed easily and quickly on your own, which makes it possible to support low-cost, short-term system projects without difficulty.

KEYENCE meets our customers' need for easy development!
BT Application Design Tool, developed for the BT Series of handheld computers, can be used to easily develop applications. This software is a perfect match for corporations that want to flexibly support low-cost, short delivery date projects!

BT Application Design Tool can be used to solve handheld computer operation and installation headaches such as those shown below. If software development causes you headaches, contact KEYENCE.

Get the catalog for more details.

In-house dedicated applications can be created without no programming required

With BT Application Design Tool, there is no need for tedious programming. It can be used to quickly create in-house dedicated applications by simply customizing prepared templates to suit the work details.

Various templates have been prepared in expectation of handheld computer usage situations, so applications can be created simply by selecting a template and customizing it to suit the work.

Get the catalog for more details.