This section includes a summary of the causes of problems that tend to occur during flow control. Controlling flow requires constant flow monitoring and accurate measurement of flow rates. Problems that occur in flow meters or flow sensors can cause the product quality and efficiency to decrease and may lead to damage in the machine tools. Time-consuming maintenance and repairs will result not only in added costs but also to lost opportunities. For this reason, it is important to know the potential causes of trouble in order to prevent such trouble from occurring and to take appropriate measures to ensure proper flow control.

This describes objects created by metallic ions contained in groundwater or tap water that have crystallized and attached to the inner-walls of the piping. They are composed of elements such as calcium, magnesium, and sodium. If buildup of too many layers occurs, the flow path inside the piping narrows and restricts flow. There is also the possibility that scaling will attach to the inside of the flow meter and negatively affect its operation. Additionally, for flow meters with mechanical components, it is possible that fragments will break off from this buildup and result in clogging.

When using floating element and paddle wheel flow meters, the display may no longer be readable or the moving mechanisms may clog. There are almost no problems with electromagnetic types, but if a thick layer of scaling attaches to the inside of the flow path, eventually the flow meter could become unable to sense the voltage that has been generated and maintenance would be required.

This is a generic term for foreign objects that exist within the fluid such as suspended matter and sediment. On a production line, this generally includes chips and abrasive grain coming from a grinding machine. Sludge is constantly circulated along with the fluid and causes clogging of the flow meter or acts as noise interference. With a flow meter that has mechanical components in the piping, axial wear and abrasion may occur, and flow may be lowered. Though sludge can be removed using a strainer* or magnetic separator, complete removal is difficult and maintenance is still required.

With an electromagnetic type flow meter, the flow pipe has a free-flowing structure, so accumulation and clogging does not occur. Sludge colliding with the "wetted" electrodes can create interference. However, the effects can be limited by utilizing an electromagnetic flow sensor with "non-wetted" electrodes. Also, flow sensors that can adjust the response time and sampling frequency are less vulnerable.

*STRAINER
A filter for the purpose of removing large foreign particles (sludge) in the fluid. As seen in the illustration below, the fluid is filtered through a metallic mesh. The filter can be removed and cleaned. 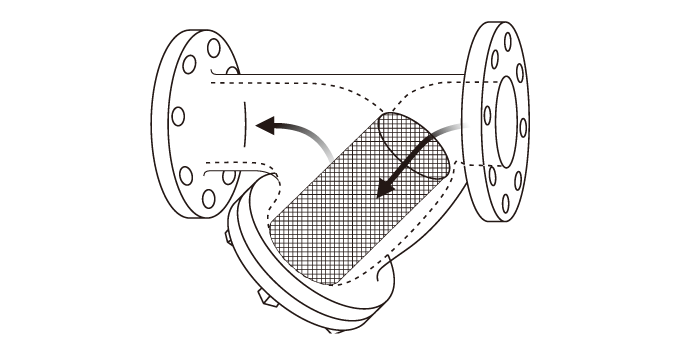 Different from scaling, this is when oxidation occurs within the pipes. Corrosion-inhibitors can be added to the fluid to prevent rust, but if pipes that are not in use come into contact with air, rust will occur. Once water flows through the pipes again, the rust turns into fragments, which flake off and become the cause of clogging inside the flow meter or attach to the window sections of floating element flow meters.

Rust creates the same basic concerns that were listed for "sludge".

This involves living matter such as algae and microorganisms in the water. It is sticky, and mud-like. Similar to scaling, clogging and obstructions will occur in paddle-wheel types, along with limiting the visible portion of the floating element type meters.

With an electromagnetic type flow meter, the flow pipe has a free-flowing structure, so accumulation and clogging does not occur. Also, because the slime itself possesses electrical conductivity, detection remains possible.