About 100 types of barcodes are available in the world. The following is an introduction to ITF barcodes. 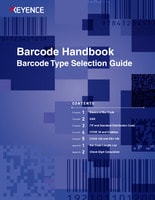 ITF is the abbreviation for "Interleaved Two of Five". It is widely used as the standard distribution code printed on corrugated cardboard boxes.
There are several types called "2 of 5" as shown below. All of them represent one character using the same composition consisting of 2 wide bars (spaces) out of 5 bars (spaces). Although their composition is similar, the code is completely different.

ITF is composed using the characters in the following table. Characters that can be represented are numbers only (0 to 9).

As ITF is the barcode with very high data density, it offers the following features:

The following figures show a comparison of the barcode length of each barcode type, when the same narrow bar width and the same amount of information are used. It is obvious that the ITF is the shortest.
(Comparison is based on the binary level barcodes)

Although ITF has many advantages, it also has the disadvantage of possible "skip reading" due to its composition. Skip reading means that the barcode representing "3852" is incorrectly read as "38" with some digits being skipped.

When ITF is used, to avoid skip reading, the barcode reader should be set to use the "digit designation" function mode where only the specified numbers of digits are read.

The standard distribution code based on ITF is explained in details.

What Is Standard Distribution Code?

Retail stores such as supermarkets aim to reduce the inventory in order to keep as wide floor space as possible. To meet this requirement, manufactures and whole sellers have to deliver the ordered goods without fail in the required quantity at the required time. This is called the just-in-time system (JIT). This brings the following situation.

Since the quantity for the delivery at a time has decreased and the frequency of the delivery has increased, truck transportation plays the main part of the distribution.
Under the current traffic conditions, it is however not allowed to park a truck for a long time for loading and unloading. Therefore, packages must be prepared (picked) so that they can be loaded onto the truck that is expected to arrive at the specified time. If every order slip is checked at that time, it takes too much time to complete the loading on the truck in time.

The standard distribution code consists of the EAN code of the product packaged and the prefixed distribution identification code.

Data composition is as follows:

Why Is ITF Used?

What Is Add-on Version?

The add-on version is the distribution code added after the standard version of the standard distribution code. It is used for products such as ham and sausages whose prices vary according to the weight of each individual package. The add-on version consists of five digits representing the measured value and the check digit with 1 digit. If a decimal point is necessary, it shall be placed between the third and fourth digits. Instead of add-on version, "GS1-128" based on CODE 128 is currently used as a code to represent measured values.