What is a QR code?

QR code (Quick response code) is a matrix 2D code for high-speed reading developed by DENSO WAVE in 1994. It was registered to the ITS standard of the AIMI in 1997 and to ISO/IEC standards in 2000.
In addition, Micro QR code was standardized as JIS-X-0510 in 2004. 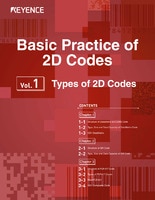 The one guide you need to learn all about 2D codes!
This guide provides an easy-to-understand explanation of the structures and standards of 2D codes such as QR code, DataMatrix, and PDF417.
Download 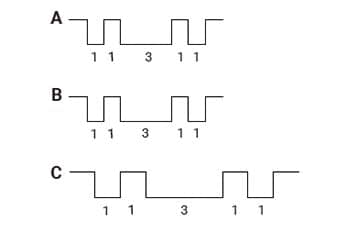 The alignment pattern is used for position detection when there is displacement of modules due to distortion.
It is applied to model 2.

The margin is a blank area around the QR code. Model 1 and 2 require a margin of four modules and Micro QR code requires of two modules.

White and black modules are alternately arranged to determine the coordinate.

It contains the error correction rate and mask pattern of the code. The format information is read first when the code is decoded.

Reed-Solomon code is applied to restore the data when a part of QR code is missing or damaged. The restoration rate varies on 4 different error correcting levels.

Data and error correcting code are arranged as shown below. (Sample: Version 2 of Model 2 with level M) A mask is applied to the code to prevent the same pattern with the position detection pattern from appearing.

QR codes are classified into Model 1, Model 2 and Micro QR. They have different features and data capacities.
“Version” indicates the size (number of modules) of a QR code. A larger version contains greater data. (The actual size of the code increases as well.)
The standard version is 21 x 21 modules (MicroQR has 11 x 11 modules), and as version increases, 4 modules (2 modules for MicroQR) are added on each side.

Model 1 is the prototype of Model 2 and Micro QR. 1 to 14 versions are registered to the AIMI standard.

When a version increases, 4 modules are added to the code in both the X and Y directions.

Model 2 has an alignment pattern for better position adjustment and contains greater data than Model 1. 1 to 40 versions are registered to the AIMI standard. The version 40 can contain up to 7089 numeric characters.

When a version increases, 4 modules are added to the code in both the X and Y directions.

Micro QR has only one position detection pattern to reduce the size so that it can be printed on minute components such as printed circuit boards. The least numbers of modules are 11 x 11.
Micro QR codes offer a space-saving alternative to linear barcodes for applications where 35 characters or less are acceptable.

When a version increases, 2 modules are added to the code in both the X and Y directions.

How to determine the QR code size

The size of QR code is determined by the version and the size of a module.

Select a version according to data contents, character type and error correction rate.
See below for maximum number of input characters.

Determine the module size considering the resolution of the printer, and the performance of the scanner.

(3) The QR code size is determined

The actual size of QR code is determined by multiplying the number of modules by the printable size of module. Add margins to determine the required space for the QR code. Model 1 and 2 require 4 modules and MicroQR requires 2 modules as margin on each side.

Data capacity of each version