Detection based on “Light”
What is a Color sensor?

Sensors come in a wide variety, and each type has strengths and weaknesses. This section provides a detailed look at color sensors. 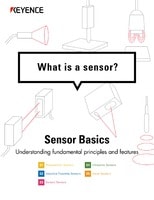 A color sensor is a type of "photoelectric sensor" which emits light from a transmitter, and then detects the light reflected back from the detection object with a receiver.
A color sensor can detect the received light intensity for red, blue and green respectively, making it possible to determine the color of the target object.

There are two types of color sensors. One illuminates the object with broad wavelength light and differentiates the three types of colors in the receiver. The other type illuminates the object with the three types of light (red, blue, and green) independently.
In both scenarios, the received light intensity of red, blue and green are detected, and the ratio of light received is calculated.

If light containing the red, blue, and green wavelengths is shown on a red object, only red light will be reflected.
* The white circle in the diagram represents a white light source.

For a white object, all three colors of red, blue, and green are reflected.
* The white circle in the diagram represents a white light source.

The ratio of the red, green, and blue reflections vary according to the color of the object.

By calculating the ratio of the intensity of the red, green, and blue light received, it is possible to distinguish differences in the color or appearance of the object.