The development of industrial robots has significantly improved production efficiency. Tooling changes and other tasks have not seen the same progress over the last 10 years. Workers still have to change jigs or settings according to the target, calibrate the system, and perform tests and modifications before starting production.

Vision-guided robots (machine vision) using machine vision and image processing technologies have been garnering attention as ways to eliminate this time-consuming work that was assumed to be unavoidable and achieve high productivity without changeover delays. This page explains the basics of vision-guided robots and points to watch out for when introducing them. 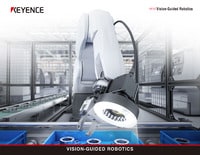 Learn how easy vision guided robotics can be!
This guide highlights applications where machine vision can be utilized for robotic guidance as well as how vision tools can be applied to simplify the process of integration.
Download

Vision-guided robots is a collective term for machine vision and image processing systems used for position detection and inspection with industrial robots. Consequently, introducing them requires selecting a system with consideration of various factors, such as compatibility between the industrial robots and machine vision/image processing systems currently used (or under consideration), the intended use or application, scalability for handling other product types, and flexibility to address changes in the facility. This section clearly explains the points to remember when you are considering introducing vision-guided robotics using machine vision and image processing technologies.

KEYENCE's XG-X Series and CV-X Series image processing systems can be directly connected with industrial robots from manufacturers from Japan and around the world, simply by selecting a manufacturer on the Global Setting screen. There is no need to worry about which robot manufacturer's products you use. Even when a robot is replaced with one from another manufacturer, the machine vision system can be used continuously. Since the programming languages of most manufacturers are supported, you can use the sample program to specify the operation flow easily.

Have you ever considered any of these questions when considering the introduction of vision-guided robots?

The purpose of introducing vision-guided robots is to improve production efficiency or reduce costs. There is no point if the introduction requires extra time and labor. This means that easy configuration is another factor to consider.

The XG-X Series and CV-X Series have a special interface for vision-guided robots. They include predefined standard settings such as pick, place, and grip correction. You can complete the settings by just following the steps of the camera setting for shutter speed or sensitivity, selecting which robot will be connected, calibration, search setting, corrective action, and so on. Vision-guided robots can be introduced with minimal labor.

Conventional industrial robots required an operator to specify the coordinates manually using a teaching pendant. Readjustment was necessary every time the target or tooling was changed, and accuracy varied depending on the operator. Vision-guided robots that are capable of auto-calibration can complete calibration at the press of a button, without manual operation. KEYENCE's vision-guided robotics have automated time-consuming work such as calibration and calculation.

If you cannot achieve the requested accuracy, introducing a vision-guided robot is meaningless and only increases the work in the final inspection. KEYENCE's ShapeTrax is a search tool that can extract targets at high speed with high accuracy, even in difficult conditions. It ensures high robustness through misalignment correction, overlapping elimination, and distortion correction. Image enhance filters such as shading correction and noise isolation allow accurate detection and differentiation, supporting various processes including appearance/dimension inspection and OCR-based character identification.

Various lenses and lights are also available to enable introduction in any environments. The LumiTrax system, KEYENCE's original integration of an ultra-high-speed camera and partial lighting, enables even more reliable and suitable image creation. The process of applying lights rapidly from different directions and capturing an image is repeated at ultra high speed. This ensures stable inspection without being affected by the surrounding environment.

Positioning for a confectionery boxing robot

Pick-and-place is a common operation for which vision-guided robots are introduced. Boxing of confectionery packs is often done manually. The process can be automated using an image processing system to recognize position and orientation.

Confectionery packs were often boxed manually; this process has been increasingly automated through the introduction of image processing and robots.

Vision-guided robots can also reduce labor for picking. Using machine vision to detect the positions of targets and sending the position information to the robot perform picking without using a positioning pallet. It is also possible to include inspection in the process. Troublesome calibration can also be automated, resulting in significant reduction in labor at startup.

The combination of a robot and a camera allows more flexible picking. Programming that was difficult has been made easy, greatly reducing labor at startup. 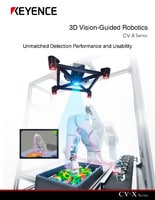