This page introduces welding robot control, including controlling robots by teaching and by using sensors. 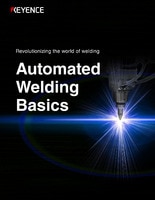 Teaching is a process of instructing a robot about a welding operation. It is indispensable for introducing robots. Teaching can be done in two ways. During online teaching, a robot is operated actually to learn the operation. In offline teaching, 3D data and operations created with CAD or other methods is loaded into the memory of a robot.
Although teaching is an important process to define robot operation, it requires a lot of man-hours. Online teaching is becoming more common, because it requires a relatively smaller number of man-hours for teaching.

In online teaching, a robot is actually operated to do welding and the movement is detected with sensors. The movement detected with the sensors is stored as a program. Playing back the stored operation (teaching playback) achieves robot welding.
In the process of robot welding, you can improve the accuracy of automatic welding by using non-contact sensors as eyes for the robot to perform tracer control by following weld lines or measurement of groove shape.

When the base material arrives on the line, a probe or wire attached on the electrode or torch end traces the surface and detects the welding position. Two types of contact sensors are commonly used: contact probe sensors and wire touch sensors.
A contact probe sensor detects the welding position by applying its probe that moves together with the torch to the groove and making it trace the weld line.

A wire touch sensor passes a weak current through a wire which is used as a filler material and makes the wire touch the base material to detect relevant positions (such as welding start/end positions or the position of the weld joint) in the way as a visually impaired person uses a cane. It has the disadvantage that, when the angle or opening width of the groove fluctuates, detection may take time because the sensor needs to repeatedly sense the contact points. 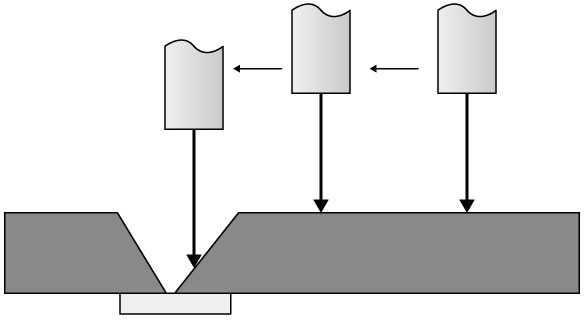 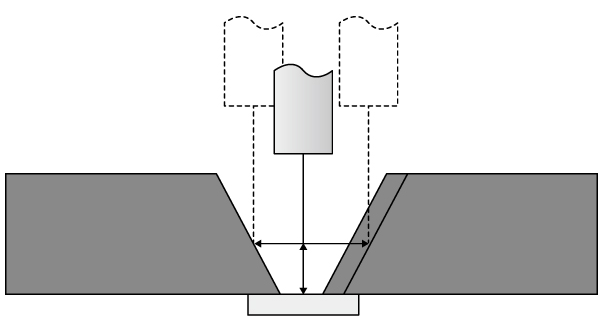 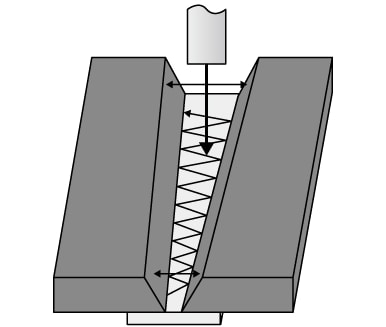 Arc sensors are used for consumable electrode type arc welding to control the welding current while the electrode weaves along the groove or to control the position of the torch according to the change in arc voltage. The cost is relatively inexpensive, but tracer control may not be possible depending on the material of the workpiece. In general, arc sensors are not suitable for detection of the groove shape.

On the other hand, laser displacement sensors are displacement meters that use laser beams and optical sensors. They can detect and output more information at faster speed compared to other sensors. They can be used for rapid tracer control of weld lines and can measure the groove shape and feed it back to the control in real time. The improved accuracy of automatic welding and shorter processing time has led to an increase in the adoption of laser displacement sensors.

Laser displacement sensors can be classified according to the laser emission method. One type oscillates the beam spot to irradiate the target and the other type uses a laser line to irradiate a large area. For example, in the tailored blank (TB) process, which uses laser welding to join multiple steel sheets with different materials and properties in complex ways to make materials for press working, a laser displacement sensor using a slit light allows quick and accurate detection and control of the weld line.
Sensors that use blue lasers can detect the shape of even weld pools that are red from the heat immediately after welding. This improves the quality of automatic welding through real-time optimization of various parameters that affect the amount of deposition, such as the voltage and current of the welding power supply and welding speed.

A laser sensor covering a large area allows measurement and output of the shape, position and angle of the groove with a single sensor head.