Laser welding requires a small beam spot capable of deep penetration, so a high-intensity laser beam with low diffusion is considered high quality.
The quality of a laser beam is defined by the convergence of the beam and the intensity of the laser. However, because the laser beans used for laser welding are invisible to the naked eye, beam quality is controlled by visualizing the laser with a measuring device such as a dedicated laser measuring instrument.

The quality of the laser beam is largely determined by two factors:

These factors are largely influenced by two separate factors, which can be managed as needed.

Beam parameter product (BPP) is the value that defines the influence of a lens on the spread and convergence of the laser beam. This value can be expressed as the product of the radius ω0 of the beam waist and the full width at half-maximum θ of the divergence angle of the beam. When passing through the converging lens, the following relationship between the spot diameter and the divergence angle after the condensing point of the lens applies.

Here, M2 describes the beam quality in units of [mm mrad].
From this it can be inferred that a smaller beam waist and convergence angle and a smaller BPP value will enable deeper penetration and faster processing. 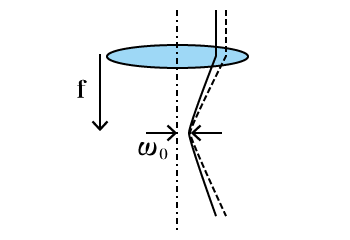 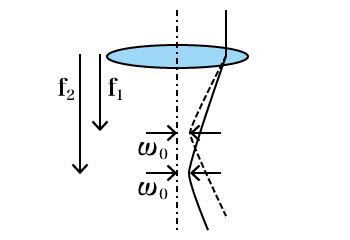 In welding and other laser processing, M2 is often used as a parameter for expressing beam quality. For example, the beam quality for fiber lasers is generally indicated by the M2 value. At a wavelength of λ, the relation between M2 and BPP can be expressed using the following equation.

The intensity of a laser is the laser power divided by the convergence, where the convergence is the spot area multiplied by the solid angle of the beam. This means that higher outputs and higher convergences will create higher intensities.

Laser beams, which allow for wide control of the output, can also be used in soldering. Dip soldering or reflow soldering is commonly used for mounting PCBs and joining electronic components. However, dip soldering and reflow soldering cause the temperature of the components to increase, which can lead to damage in heat-sensitive components.
With light-beam soldering, heat is applied only to a small spot as needed, making it possible to solder even heat-sensitive components. Light-beam soldering can also be automated. This joining method is made possible through laser technology, which provides easy control over a wide output range.