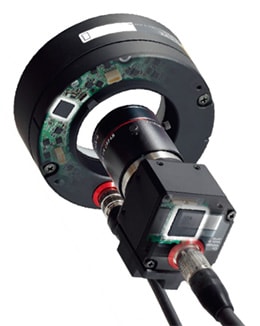 Crispy fried onions. Chances are you've enjoyed the taste of them on Grandma's green bean casserole, or used them as a crispy topping on cheeseburgers or garden salads. For over 50 years, these flavorful tidbits have been a regular in kitchens around the world, and are sprinkled on everything from meatloaf to mashed potatoes, pizza to stir-fry. If you've ever wondered how this pantry staple keeps its crunch, keep reading.

Like many mass-produced foods, deep fried onions are produced and packaged on automated manufacturing lines. Similar to the making of any other consumer good, raw material enters one end of the line and packaged product emerges from the other. One aspect that's different with food production, however, is the need for airtight seals to assure the products will remain fresh and be safe to eat.

KEYENCE helped one such food producer recently. Due to confidentiality reasons, the company must remain anonymous, but one of its project managers had concerns over the foil seal used on the fried onions containers. At that time, the method used to inspect the container was an optical eye, which focused on the center of the seal to detect its presence (or absence). But since the system only looked at the middle of the package, the responsible project manager knew there was a possibility of seal misalignment, or gaps around the edge of the can that might lead to a less than airtight product. "The existing system was functioning fine, but there was no chance of detecting any minor defects," he says. "The seal might be present but not fully applied, for example, and The large Lumitrax™ light is aligned with the camera (connector positions matching). The camera inspects through the ring light. Inspect aluminum foil seal for defects/missing portions of seal. FOOD INDUSTRY Case Study it would pass as a good can. We hadn't had any consumer complaints, but there was a possibility it could happen, so we wanted to be proactive."

When in full production, fried onions roll off the line at the rate of 250 cans per minute. Depending on the size of the can currently being packaged, that's at least 100,000 pounds daily, product that must be sealed properly if it's to stay fresh on its long journey to the supermarket. KEYENCE machine vision technology sales engineer Dave Spotanski visited the factory to evaluate the challenging requirements there, and then returned to his office in St. Louis with enough cans of fried onions for a holiday feast.

Spotanski assembled a small mock-up of the production line and, using KEYENCE's LumiTrax™ vision system, tested various iterations of what could go wrong with the can seal. He knew the foil's metallic, shiny surface would be a challenge for some vision systems, but felt confident the patented LumiTrax™ Texture Image algorithms would properly image the seal without the need for special lighting, and could meet the 300 can per minute target set by the factory.

He positioned an ultra-high speed VGA color camera equipped with an 8mm low distortion lens roughly 20 inches over the base of the food can, then placed a ring light a finger's width above the seal surface. The camera inspects the seal through the ring light, taking five images in 1.7 millisecond intervals while triggering each quadrant of the light separately. These images are then fed into the LumiTrax™ CVX200 Series controller for processing, which analyzes each snapshot and compares it to the others in the set, effectively cancelling out glare or reflections. Despite the fact that the product would be traveling at approximately 150 feet per minute beneath the imaging system, the KEYENCE was able to detect holes, missing portions of the seal, and misalignments.

The customer was convinced. Spotanski came back onsite to work with the factory's lead integration engineer, who connected the LumiTrax™ to a programmable logic controller (PLC) and a servo relay to "kick out" any defective product. "Dave was very helpful in getting me the information needed to get the system running. I would defiantly recommend the LumiTrax™ to others—I especially like that it has its own processor, and all you have to do is plug in a monitor and a mouse."

There's more to the story. Farther down the production line, another inspection process is needed; this one performed by a human who makes certain the plastic lid is snapped into place before the product leaves for final packaging. By integrating a similar system, the project team was able to automate this onerous task and put that employee to better use elsewhere in the plant. Says Spotanksi: "The second system uses a backlight about the size of a piece of paper, with a high-speed camera positioned opposite the product. We're able to take a single snapshot and quickly inspect the silhouette for the expected gap between the lid and the can itself. If it falls out of tolerance, we kick it out."

The project manager has since recommended the LumiTrax™ to fellow engineers designing other production lines in the facility. "I'm also looking to roll this out to one of our food pouch lines soon," he says, "and will hopefully do more with other products in the future. I expect the vision system will eliminate any complaints on defective seals. Overall, I'm pleased with the solution."