tcm:26-138291-64
Quick Delivery and Comprehensive Support Most products are in stock and ready for same-day shipping - contact us to get your order started

SJ-H Series is a collection of advanced ultra-high-speed, charge sensing ionizers featuring low maintenance with the highest level of static elimination performance in all environments. While air is commonly used to improve static removal ability, compressed air may cause problems in certain industrial situations. The SJ-H Series achieves the highest level of static elimination in the industry without the use of air. Air-assisted static elimination is also available. Equipped with a function that controls air-flow and ion generation, the SJ-H has achieved top-class low-maintenance in the industry. The smallest-in-class body includes features that support any and all static elimination needs. SJ-H ionizers have a wide range of uses.

SJ-LF Series compact fan static eliminators are anti-static blowers that allow operators to “see” whether there is static and “verify” that static has been removed. The “visualizing light” and large indicator display the electrostatic level. This means that it is possible to instantly determine whether the static on the target object has been properly eliminated, making operations checks during startup easy. The compact body is one-fifth of the size of conventional small blowers, which gives the SJ-LF an array of different installation options. The main unit itself can generate airflow, so there is no need to supply air from a compressor. The SJ-LF Series is a lineup of static neutralizing blowers that embody solutions to on-site needs, alerting operators to errors and failures with alarms, including an ion level alarm.

SJ-F2000/5000 high-speed, high-accuracy wide static elimination blowers are wide sensing ionizers that neutralize static-induced problems by removing static from the environment, including products, human bodies, and peripheral parts. The fastest-in-class static elimination performance and high-precision ion balance, together with the wide-range airflow adjustment function, support various settings for a static-free environment. Because ions are supplied at the optimal balance that matches the electrostatic charge, no cumbersome initial settings are required during implementation or maintenance, delivering even more effective static electricity elimination. SJ-F2000/5000 Series static elimination blowers offer high performance and excellent usability at a higher level. With functions that suppress wear and dirt build-up in the elimination probe, the static control system employs a structure that allows easy maintenance, and a compact body that takes little space for installation.

In warehouses that store electronic parts and films, charged ions need to be delivered quickly over a wide area to reduce static. A bar-type static eliminator can neutralize a wide area of space.

In the pulse AC method, the positive and negative voltage is applied alternately to a single electrode probe, generating ions of both polarities. In the pulse DC method, each electrode must be positive or negative. This pulse AC method performs well under all conditions as more ions are generated than in the conventional method and the ratio of positive to negative ions can be changed. By delivering ions throughout the entire room and removing the electrostatic charge from airborne particles, the ionizer can prevent them from being attracted to surfaces. Also, using a bar-type ionizer in front of the entrance to a static-free site can prevent static charge and particles from being brought in by operators.

Using a dust collector in a process that transfers electronic parts can make sheets and films flutter because of the vacuum. In addition, the air may cause small, light electronic parts to be blown away. Ionizers that do not use blowers can eliminate static charges without unwanted excess air.

Non-blower type ionizers remove static charges from delicate parts that are sensitive to dust and wind pressure without using air. For example, an airless ionizer can remove static charge from thin sheets and films without making them flutter. This allows fine parts to be neutralized without being affected by wind. The efficient delivery of ions to target objects helps the elimination of static electricity over a wide area even without the use of supplied air. Even compact, space-saving spot types can airlessly remove the static charges.

The anti-static method of blowing off dust can generate static charge and cause dust to stick to surfaces again. Using ionizers for static elimination can also remove dust. This can neutralize products and prevent dust from re-adhering once static elimination takes place.

Ionizers that remove dust by high-pressure air purges remove dust and static electricity at the same time. Static is eliminated when dust is blown off, neutralizing the target object and preventing re-adherence. These ionizers can be attached to conveyor systems for static elimination and dust removal of products during transfer as well as be used at entrances to cleanrooms.

Before people or objects enter a room, air shower equipment removes dust from the surfaces using an air jet purified by a HEPA filter. However, if clothes and dust are charged, the blown-off dust can reattach itself to the surfaces. This is because air showers cannot eliminate static electricity. They can increase charge, and do not completely remove dust and dirt. In such cases, ionizers should be used to blow off dust and dirt with ionized air. With no re-adherence, contamination caused by dust and dirt can be significantly reduced.

When formed products are charged by friction inside the mold, they may stick to the mold and not come out. Smaller, thinner formed plastics are light and stick more easily to surfaces. Combined with the increased complexity of the shape, the larger interface surface with the mold makes them prone to charging. High-speed molding machines can have a higher level of static buildup due to their rapid injections, which consequently increases the risk of residual products in molds. While preventive action such as using a cover may be considered for particulate-induced defects, it is not effective for reducing static. Similarly, installing sensors can be considered in order to deal with residual products in mold, but sensors can only detect products remaining in the mold and still need human hands to remove them, causing frequent stops and longer time in production. Ionizers can eliminate static charges and prevent particle adhesion and residual products in mold, which is useful for reducing wasted materials and improving manufacturing yield.

Camera parts can accumulate a charge from friction and peeling during assembly. Dust and particles are attracted and adhere to charged parts. Dirty parts go to the next process and bring dirt inside cameras. This is caused by insufficient static elimination. Not being able to confirm static elimination is another issue. Some static eliminators have a “visualizing light” for showing electrostatic levels. With these static eliminators, it is possible to instantly determine whether the static on the target object has been properly eliminated, making operation checks during startup easy. Effective particle control can be put in place while verifying the effects. It can also save workers from having to remove and clean out dirt and particles that were not removed.

How particles adhere to surfaces depends on whether the surface is conductive or non-conductive. In either case, an ionizer can be used for prevention. If the surface is plastic or rubber, or any other kind of non-conductive material, and the location of static buildup is known, particle adhesion can be prevented by localized static elimination. On the other hand, with conductive surfaces, the particles themselves can be neutralized to prevent adhesion. A bar-type static eliminator can be used for a large space where airborne particles are present to eliminate static from the entire room. In this case, removing the electrostatic charge from airborne particles can prevent them from being attracted to surfaces.

Humans constantly accumulate charge when moving. A bar-type static eliminator can be used for a large space where airborne particles are present to eliminate static from the entire room. To eliminate static from large spaces, the neutralizing ions must be carried long distances. Some ionizers can have different cycles (frequencies) to generate positive and negative ions. Lower frequencies make for a longer emission time of ions of the same polarity, which makes them repel each other and spread wider. In contrast, higher frequencies switch positive and negative ions rapidly, which causes like ions to be attracted to each other and prevents them from traveling any significant distance. The frequency should be set lower for static elimination for large spaces.

Problems in transfer processes can vary, including incoherent pass-over timing, friction or suction on object surfaces, chemical affinity, magnetic force, and static buildup. Among such factors, static electricity tends to be a common culprit for transfer trouble at manufacturing sites. Such problems can be solved by making the Coulomb force―be it attractive or repulsive―disappear, which specifically means to remove the static charge. For example, in case of a problem of sheets sticking to a roller, an ionizer should be aimed at the point where the sheet leaves the roller. In another example where parts from a part feeder lift up and do not flow well on the conveyor, an ionizer should be aimed at a point between the rail and parts for static elimination.

Damage to electronic equipment and devices

Application and marking problems are sometimes caused by forces described in Coulomb's Law. If the material to be painted is negatively charged before the application process, it is possible the paint, sealant, or whatever is to be applied will be repelled. This is due to Coulomb's Law. Application and marking problems can be solved by making the Coulomb force disappear. More specifically use an ionizer to remove the static charge. An ionizer used to prevent an application or marking problems can be installed so that the ionizer focuses on the intended area. A nozzle-type ionizer is suitable for installing in such narrow spaces.

Dust and particle adherence to metal objects (conductive objects) is caused by charged dust and particles coming near the object and producing electrostatic induction inside the object. Electrostatic induction can also occur when an object is grounded, and therefore taking direct anti-static measures for metal objects is not effective. For the above reason, it is important that you take anti-static measures against clinging dust and particles. However, static elimination of airborne dust and particles in the open air is realistically impossible. Therefore, the general way to do this is to neutralize the entire space, or in other words, create an environment that can be constantly be neutralized.

Usually, static mats, static flooring, grounding cables, or other methods are used to control static electricity while on the table or bench. As the PCBs leave the bench or table and are transferred into the plastic parts, static elimination can be performed. Ionization during the transfer is an effective method. Eliminating static from the entire room is the most effective for preventing ESD damage. Using an ionizer is one way to eliminate static from the environment. 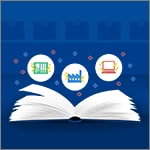 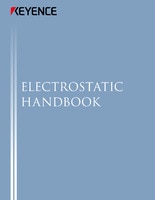 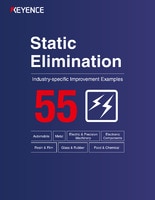 This document introduces actual examples of anti-static measures taken in the automotive, metal, electronic parts, food, and other industries. A must-read for people working with static electricity problems. 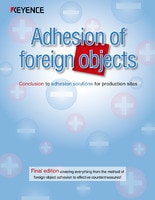 Particle adhesion problems are seen across industries such as semiconductors, LCDs, food and drugs, and automotive. This introduces everything from how particle adhesions occur to how to prevent them, how to remove dust after particle adhesion, and the latest static eliminators.