Fiber Optic Sensors offer a compact and versatile solution for presence/absence detection. Regardless of environment or mounting style, KEYENCE Fiber Optics can be used anywhere. 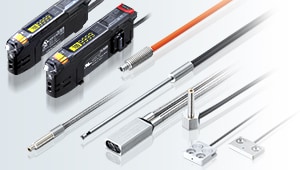 What is a Fiber Optic Sensor?

A fiber optic sensor is an instrument that measures light from an LED (or other device) for detection purposes. These devices are most commonly used in factory automation environments.
Fiber optics feature two distinct components, an amplifier and sensor heads. The amplifier contains "the brains" of the sensor as well as the light source. The fiber optic cables/heads are used solely to transmit and receive the light.
Because there are no electronic components in the sensing heads, fiber optic sensors are commonly used in tight spaces, harsh environments, or simply where other sensors cannot be used.

Fiber optic sensors detect target conditions by transmitting light onto or across a target and measuring the increase or decrease of light returned.

The properties of light include straightness, refraction, and reflection. Fiberoptic sensors utilize these properties to enable various types of detection.

Refraction
Light normally travels straight through air or water. However, if the light passes through a boundary surface between materials with different refractive indices, the direction of travel changes. This phenomenon is referred to as refraction.

There are several types of fiber optic sensors. Detection methods include thrubeam, reflective, retro-reflective, and definite-reflective. Each method is used for different applications and targets.

Thrubeam models
Thrubeam models include a transmitter and receiver installed opposite each other. As the target passes between the transmitter and receiver, light is blocked, and detection is performed by determining the decrease in the received light intensity. Detecting distances range from a couple inches to several feet. Stability is achieved with high resistance to dirt and dust. Opaque targets can be detected regardless of reflectance, color, or material.

Reflective models
With reflective models, light emitted from a transmitter hits the target and the reflected light is returned to the receiver. Target detection is based on the amount of reflected light returned to the receiver. Because the detecting distances range from a couple inches to several meters, adjustment during installation is incredibly easy. Detection is possible even for small targets.

Retro-reflective models
Retro-reflective models detect the amount of light returned from a reflector installed opposite of the transmitter. The light from the reflector is blocked as a target passes through, reducing the amount of received light. Targets are detected by measuring this reduction. Installation is easy with detecting distances ranging from a couple inches to several feet. Detection is also less likely to be affected by target color or angle, and opaque targets can be detected regardless of shape, color, or material.

Fiber optic sensors are compact because the detection circuit is located in the amplifier, allowing for detection even in narrow spaces. Installation and adjustment are easy and the devices have high environmental resistance—just a few of the advantages offered by fiber optic sensors.

Fiber optic heads are compact and ideal for mounting in tight spaces. Additionally, the cable connecting the fiber optic heads are highly flexible, allowing for the cable to be easily routed. For example, mounting on a robotic arm is common for fiber optics.
Also, because the fiber units do not house any electrical circuits, they are resistant to temperature, humidity, vibration, impacts, and fluids. This ensures high operation reliability even in locations where electrical noise is generated.

Most fiber optic sensors use light from an LED to detect targets, enabling detection of a wide variety of materials. This also allows for faster response times compared to other sensors.

A wide variety of target materials can be detected including metal, glass, plastic, wood, and even liquid. Stable detection is also possible for low-reflectivity target materials such as rubber and sponges. This is achieved by increasing the amount of emitted light. Some models also include a switch for adjusting the light intensity to help solve light intensity saturation problems caused by too much light. Light is emitted from the fiber unit at high speeds, and the fiber optic sensor has no moving parts, significantly reducing both operation and response times.

There are several types of detection methods with fiber optic sensors, including thrubeam, reflective, retro-reflective, and definite-reflective. Each method uses an LED or other light source for non-contact detection. This prevents damage to both the target and the sensor.

There are several types of detection methods with fiber optic sensors, including thrubeam, reflective, retro-reflective, and definite-reflective. Each method uses an LED or other light source for non-contact detection. Non-contact measurement ensures targets are not damaged while also protecting the sensor.
Some fiber optic sensors are also capable of long-range detection by increasing the power of emitted light, while still having fast response times. This range of sensing options allow users to choose the right combination to best suit their specific needs.

In high-temperature environments such as drying rooms, sensors with detection circuits may be damaged as the detection circuit heats up. FU Series fiber units, however, do not have detection circuits in the sensing head. Heat-resistant fiber units can handle temperatures of up to about 300°C (572°F).
The high-output FS-N40, with its newly developed NEO Parabolic LED, offers 7.5 times the received light intensity of conventional models. Meanwhile, the TERA power mode offers 220 times more power with the flick of a switch. These features enable long-range detection with no influence from heat.

Photoelectric sensors use light to detect the presence or absence of targets. Such sensors usually use an LED as the light source and consist of two parts: a light transmitter and a light receiver. As the target passes between the transmitter and the receiver, the reflected or blocked light is converted into an electrical signal and output.
Although fiber optic sensors detect targets in basically the same way, the amplifier and the head are connected by a fiber unit. Because the amplifier that outputs the light and the transmitter and receiver are separated, these devices can be combined in various ways, so detection can be performed in various environments. The fiber unit is also incredibly thin and compact, so installation is possible in a wider variety of locations.

Detection errors are more likely when detecting small targets. Slower response speeds may also prevent detection of small, dropped targets.
To prevent such errors, select a thrubeam sensor with a small optical axis or use a slit to reduce the optical axis when detecting small targets. Doing so will stabilize detection while still providing an area large enough to capture the target.
The FU-E40 Fiber Unit (FU Series) uses an area light to detect targets passing in various positions. The amplifier makes it possible to ignore gradual changes in light intensity caused by dust or dirt, ensuring that only sudden light intensity changes caused by a passing target are detected. Also, because the light is focused, this sensor can be used in crowded or tight spaces. 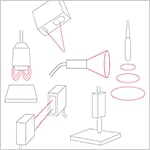 This site provides basic information to better understand sensors. Nine varieties of sensors are highlighted based on operating principle, structure, characteristics, and variations. Learn all about sensors starting from the basics.