Parts with free-form surfaces such as impellers and propellers are machined using multi-axis machining centers that require advanced mechanical control. Many of these parts are thin, making them susceptible to deformation during machining. Because this deformation directly affects the performance of the equipment where these parts are installed, strict dimension measurement is essential.
This page explains basic knowledge of free-form surfaces, the machine tools used for machining of free-form surfaces, and types of deformation that occur during machining. It also introduces problems in conventional measurement methods as well as inspection and analysis solutions to prevent the occurrence of defective products.

Types of Deformation Caused by Machining and Countermeasures to Them

When machining, thin or fine workpieces may undergo warpage, strain, and other deformation that can result in machining error even when using tools with specified accuracy. In such cases, it is necessary to change the design to prevent deformation or consider the resulting deformation in advance when machining the workpieces. This section introduces the causes of deformation during machining.

Deformation caused by external forces such as clamping force and machining pressure, and countermeasures to it

• Clamping force
Clamping force deforms a workpiece when the fastening force used to fixture the workpiece in place exceeds the strength of the section that is fastened.
The most effective way to prevent this is to change the position or orientation in which the workpiece is fixtured. If the position or orientation cannot be changed, deformation can be prevented by fastening easily deformed sections using support jigs.

A workpiece can become deformed by machining pressure when the workpiece is machined by a cutting tool. Effective countermeasures to prevent deformation include changing the workpiece shape by increasing the thickness at the deforming sections, reducing the amount of cutting, or lowering the hardness of the material. If the workpiece shape cannot be changed due to specifications or functional reasons, deformation can be prevented using a method called warpage removal. This is when a workpiece is roughly machined with extra thickness and is later finished by a separate machining process.

Deformation caused by cutting heat (working heat) and countermeasures to it

Deformation caused by residual stress and countermeasures to it

Stress remaining inside the workpiece even after the removal of clamping force, machining force, and all other external forces is called residual stress. The force acting inside an object from the inside toward the outside is supposed to be balanced with the force acting from the outside toward the inside. However, when this balance is disrupted by machining pressure and cutting heat during machining, warpage and strain can occur. Thin materials are particularly susceptible to warpage, and hard materials are particularly susceptible to warpage and strain. Even when the shape of a workpiece is normal while it is being clamped, it may deform after it is released from the clamp. To prevent this, the process known as annealing is performed. A workpiece is annealed before cutting to soften the workpiece making it easier to machine. It also equalizes hardness to prevent uneven machining and minimizes variation in workpiece hardness.

It is extremely important that the dimensions and shapes of free-form surfaces, such as those of impeller blades and spiral gear teeth, are as intended. Highly accurate and quantitative 3D shape measurement is required for cross-sectional shapes as they can greatly affect strength and operation accuracy.
Typically, coordinate measuring machines or calipers are used for measurement; however, these methods involve a number of problems such as difficulty in achieving accurate measurement and variation in measurement from user to user. These include the difficulty in achieving accurate measurement with a coordinate measuring machine, and variation in measurement depending on the operator when using calipers. In addition, much time is required to identify the cause and solution when a problem occurs during machining. 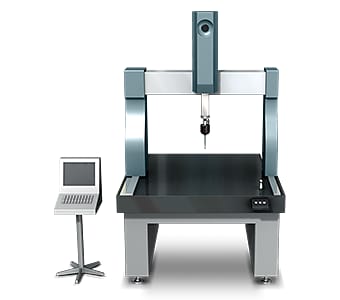 A coordinate measuring machine is typically used when measuring a free-form surface by using a probe to contact particular points on the target measurement surface. The probe needs to accurately contact the predetermined points.
When the measurement area is large, accuracy can be increased by increasing the number of measured points to collect more measurement data.

However, using this method for measurement of free-form surfaces involves the following problems.

Solution to Problems in Measurement of Free-form Surfaces

In all, the problems with conventional measurement tools is that they cannot capture full surface 3D data due to the fact that area measurement is done by means of point and line contact.
To resolve these measurement problems, KEYENCE has developed the VL Series 3D Scanner CMM. The VL Series accurately captures the 3D shape of the entire target surface without contacting the target. A 3D scan of the target on the stage can be completed in as little as one second, for high accuracy measurement of the 3D shape. This allows quantitative measurement to be performed easily without variation in the measurement results. Some specific examples of the advantages of the VL Series are explained below.

Advantage 1: Visualize differences from the 3D-CAD data in color.

It is possible to compare a product’s 3D-CAD data with the acquired measurement data for color visualization of any differences between the actual product and the design. This can dramatically reduce the number of man-hours required to analyze the shape of products.
The 3D data can be rotated in any direction, enabling specified locations to be measured, such as the pitch and curved shapes of impeller blades. Additionally, longitudinal and transverse cross-sections can be measured without destroying the workpiece.
The entire shape can be identified and the dimensions of specific locations can be measured by simple click operations, enabling quantitative measurement that is not affected by the skill level of the operator.

Advantage 2: Easy measurement of over-pin dimensions. Cross-sections can be clearly identified without the need to cut the target.

Over-pin dimensions of a gear measured using tooth thickness calipers or a tooth thickness micrometer lack reliability and stability. This is because the measurement points vary depending on the operator. Along with that, the jaw and spindle may be unable to actually reach the measurement points. Because measurement is based only on individual points, it is difficult to measure 3D shapes.
With the VL Series, you only need to place the target on the stage and scan it. The 3D shape of the target can be captured by non-contact means and no positioning is required. It is possible to display the entire target or to measure the profile at any location. This makes it possible to visualize and identify the locations and precise numerical values of shape defects.
The VL Series can also measure cross-sections when comparing the acquired data with 3D-CAD data without the need to cut the workpiece. Over-pin dimensions and tooth shapes can be visualized in color using the acquired 3D data. This enables cross-sectional measurement to be performed easily, without contacting the target. By checking for misalignment of cut profiles, it is possible to rapidly detect and enact countermeasures to machining deformation and other defects.

The VL Series can instantaneously and accurately measure free-form surfaces by high-speed 3D scanning without contacting the cutting product.

In this way, the VL Series can deliver dramatic improvements in efficiency for work such as measurement of machined products having free-form surfaces, defect analysis, and defect countermeasures that are indispensable to quality control in machining processes.