Inspection of Piston Rings at PSA

Piston rings at PSA are inspected using an automated system. Since being fitted with KEYENCE laser displacement sensors a few years ago, the system makes accurate and detailed on-line measurements. 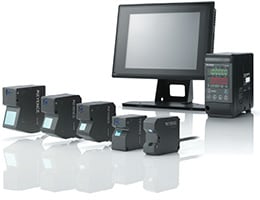 The town of Trémery, located 20 kilometers north of the city of Metz, in northeastern France, is home to an engine plant owned and operated by PSA. Opened in 1979, the plant employs 3,740 people and turns out 6,500 four-cylinder diesel engines each day, making it the world’s largest diesel-engine plant and the fourth largest for all types of engines combined.

At the plant, piston rings are fitted on engines by a robot. Each piston ring is split, allowing its ends to be spread apart so that it may be slid into a groove specially machined on engine pistons. Piston rings are crucial components for three reasons firstly, and primarily, they prevent combustion gases from entering the engine sump and causing a loss of gas pressure and thus a loss of engine power. Secondly, they prevent lubricants from migrating from the engine to the combustion chamber. Thirdly, they coat each cylinder with a well-defined layer of lubricant. Because piston rings play a crucial role in engine operation, they must be properly fitted.

Each piston on every engine is fitted with three rings – an oil ring, a sealing ring and a compression ring. The oil ring is the hardest to inspect because it is ultra thin and has a small, fragile spring. On the other hand, the compression ring measures 3 mm and is the easiest to inspect. At PSA’s Trémery plant, piston rings are inspected using an automated system. A robot places a piston fitted with all three rings onto a rotary table. Four sensors are then arranged on either side of the piston, each one scanning one half of a ring. To begin the process, the table rotates 180 degrees, allowing the sensors to scan the first two rings. The table then rises along its Z-axis and rotates 180° in the opposite direction so that the third ring can be scanned by two sensors. If a ring is found to be nonconforming, it is scanned a second and a third time. If a suspected defect is confirmed, the piston is given to an operator for further analysis.

“The displacement sensors measure all the dimensions of each half-ring. Around 2,500 measurements are made per rotation, which is in increments of less than one-tenth of one millimeter. It takes about 5 seconds to inspect all three rings. We have set thresholds for checking the presence and position of the three rings in the groove as well as the size and location of their openings. We also check the spring of the oil ring through its openings. We do this using KEYENCE’s LK-G32 model. We chose this model because of its high accuracy and its 30 micron spot diameter, which is small enough to fit inside the openings of the rings,” says Claude Tritz, Assembly Maintenance Technician at PSA’s Trémery plant. 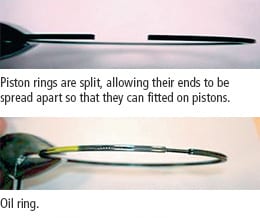 The LK-G Series is made up of laser displacement sensors, the most accurate models offer sampling rates of 50 kHz and 0.05 μm repeatability. The shiny surface of the piston rings makes measuring them difficult. The correction functions of the LK-G sensors ensure stable detection of clear, plastic and metal targets. ABLE (Active Balanced Laser control Engine) technology senses the surface of a target and adjusts the intensity of laser light to an optimal level. ABLE intelligently controls the three elements of laser emission time, laser power, and gain (CCD amplification factor), achieving a wide dynamic range of light intensity that is up to 90 times wider than conventional models. The MRC (Multiple Reflection Cancel) algorithm eliminates multiple reflections from metal surfaces. When two or more peaks are generated by multiple reflections, the algorithm compares the waveforms to the most recent received light waveform and determines the one with the most similarity to the “correct waveform”.

“Since installing the LK-G sensors a few years ago, we have seen a significant reduction in the number of false defects compared with the previous system. Despite this rate and the tough conditions, the LK-Gs are able to keep pace,” says Claude Tritz.