Transmitted lighting is typically used for two different types of samples: objects that are transparent or semi-transparent or those that are opaque and require backlighting for measurement. For this type of setup, light shines from behind the object, passes through it, and is received by the eyes or a camera. This lighting is mainly used for biological applications where users are imaging cells or tissues on glass slides or other specimen holders. It also works well when backlighting an object, which creates a well-defined silhouette of its profile, allowing for more precise and accurate measurements. 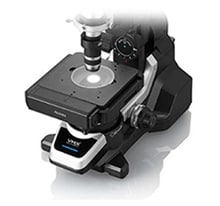 Transmitted lighting comes standard with the motorized XY stage, producing consistent brightness from low to high magnifications. It is also possible to use the LED transmitted lighting in conjunction with reflected illumination from the lens. The light from each source can be adjusted independently, making it possible to perform observation with an optimum balance of light intensity.

When viewing a sample at low magnification, the light is applied uniformly to the entire target. As the magnification is increased, the light can be concentrated to improve the contrast of the image.