What is 3-Axis and why is it important?

Beam control is vital to any laser marking application. Generally, laser markers use an X-axis scanner and a Y-axis scanner to move the beam across a flat surface in the desired shape or pattern.

However, typical laser marking machines are limited to marking on flat surfaces due to structural characteristics of the lens. Additionally, most laser markers cannot mark accurately as they move away from the center of their marking field.

In order to satisfy such needs, KEYENCE developed 3-Axis technology.

THE ROAD TO HIGHER ACCURACY AND WIDER MARKING AREAS

Conventional laser markers use fθ lenses. The fθ lens, mounted on the laser emission part of the laser marker, converges the laser beam and maintains a constant laser scanning speed in the marking area (fig.1).

It is possible to reduce variations in the focal position by using more than one lens in combination. However, since some lenses —particularly lenses for CO2 laser engravers — have low light transmittance, using those lenses in combination causes laser emission power loss. In addition, scanning area distortions due to the lens characteristics may bother users. 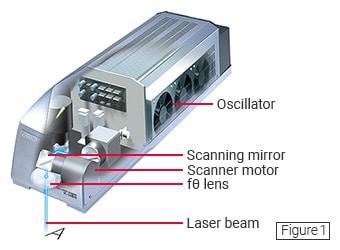 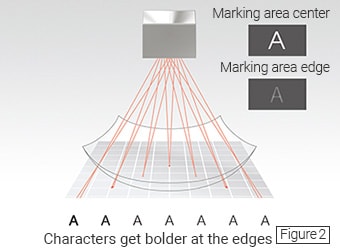 Keyence's 3-Axis Laser Markers have an innovative structure that does not use an fθ lens. 3-Axis technology sets these lasers apart, since typical systems suffer from focal point variations, scanning area distortions and laser emission power loss. The Z-axis scanner replaces the conventional role of the fθ lens to converge the laser beam and control laser scanning at a constant speed on marking surfaces. As the name 3-Axis suggests, controlled focusing is maintained for marking and processing on 3D surfaces by simultaneously controlling scanners on three axes (fig. 3). 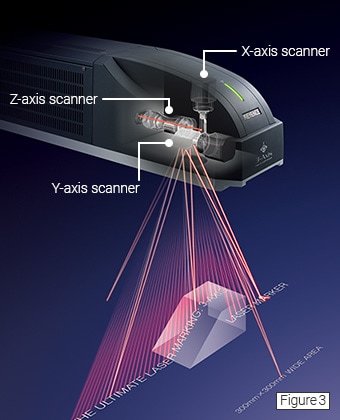 The wider the laser scanning area, the more noticeable the fθ lens characteristic becomes. A 3-Axis Laser Marker, equipped with a Z-axis scanner instead of an fθ lens, can provide fully-focused laser scanning across a wide marking area without being affected by lens distortions. As a result, a 300 mm × 300 mm (11.81" × 11.81") wide marking area can be achieved while maintaining high laser beam output and positioning accuracy (fig. 4) While 3-Axis technology is a feature that enables marking on 3D surfaces, it is also very effective in marking and processing on flat surfaces.

3-Axis technology was developed to achieve highly accurate, 3D laser scanning in a wide area. It also unlocks functions like deep dig-engraving for fiber lasers and indexed rotary marking. By developing original technology, KEYENCE will continue to expand the possibilities for laser markers.