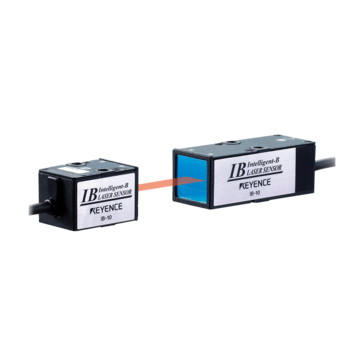 IB Series thrubeam type laser detection sensors cater to a diverse range of applications by differentiating received light intensity with high accuracy. This series uses a photodiode (PD) for its light receiving element. By accurately detecting the changes in received light intensity, it can support various applications without being affected by the target. For example, the IB Series can be used for applications that are impossible with photoelectric sensors, such as detection of liquid crystal glass and liquid turbidity, differentiation of film types, tilt detection of chips, and incorrect seating of caps, all at low cost. The compact sensor head is equipped with an alignment LED, so optical-axis alignment is easy.