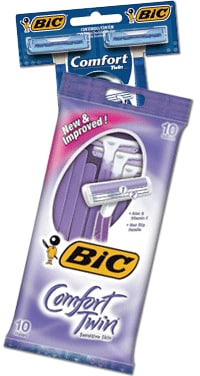 BIC has presence present in 160 countries on all continents for more than 60 years. The brand is one of the most recognized in the world – the BIC® Cristal is the world’s top-selling ballpoint pen and the company is the leading manufacturer of stationery products in Europe, Latin America and Africa, as well as a world leader in brand-name pocket lighters. In 1975, BIC revolutionized the shaving world with its first disposable single-blade razor. Sales of its triple-blade and quadruple-blade razors are growing strongly and the company is the world’s second- largest maker of disposable razors. In 2012, BIC reported net sales of 2,482 million USD, of which 20% was from razors.

“We perform several quality control checks. We look for missing or defective blades: we inspect the covers, which are little plastic parts that hold the blades in place, we check for defective or mispositioned lubricating strips, and, last of all, we check the front bars, which are the parts that glide over the skin,” says Jean-Philippe Pollet, Assembly Project Manager for BIC® Comfort Twin/Classic razors.

“The razors have shiny, lubricated blades with grooved front bars that make detection difficult,” adds Mr. Pollet. “The previous system we used would reject good razors, so we had to resort to sorting by hand. What we needed was a vision system that could overcome these issues, carry out numerous checks and inspections and keep up with our high production rates.”

After installing a KEYENCE vision system, the plant saw an increase in its detection reliability for three reasons. First, the system’s miniature cameras freed up space for KEYENCE’s larger, higher performance lighting. Second, the resolution is finer despite the high production rates. KEYENCE’s 2 megapixel miniature color camera is the world’s smallest and transfers all 2 million pixels in 59 ms. Third, detection is stabilized by the integrated image optimization algorithms (image filters).

“The algorithms and software toolsets really influenced our decision to choose KEYENCE, as did the compact design of the cameras because there’s not much space to place things on our assembly machines. Last of all, the system’s intuitiveness and easy programming are advantages. The settings are easy to change, and that’s very important. We were able to quickly develop intuitive user interfaces that allow our operators to change the detection thresholds and other settings by themselves,” explains Pollet.

KEYENCE’s XG Series vision systems offer an optional PC-based programming environment, called VisionEditor, that is intuitive, simple and fully customizable. Programming is done in the form of a flow chart in which users simply drag and drop processing “blocks” and features a wide range of algorithms and filters.

“KEYENCE’s vision system combines detection quality and stability. It has enabled us to achieve a sixfold reduction in our razor reject rate and do away with manual sorting. As you can imagine, the financial gains are considerable. Furthermore, even though the cameras are miniaturized, they capture color images. As a result, we can check the shade of the lubricating strip, something that wasn’t possible before. Last of all, although knowing a few basics of vision technology is necessary, the system is quite easy to learn how to use,” concludes Pollet.