Tata Steel Europe (whose former name was Corus) is the second largest steel producer in Europe. The parent company, Tata Steel is one of the top ten steel producers in the world. The total capacity of crude steel Group, which employs about 80,000 people on four continents, is over 28 million tons. Tata Steel Rail Division France has 508 people for a production of 456,000 tons of rails and sleepers in 2009. This division has over 150 years of experience in the rail. The products are designed for high-speed lines, conventional networks, heavily loaded routes, metro and urban tramways. 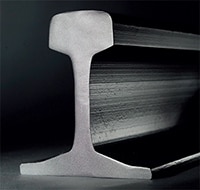 Tata Steel Rail France takes great care in inspecting the straightness of the ends of its rails so that its customers receive the straightest possible rails. As a result, it has recently retrofitted its end straightness inspection systems with KEYENCE’s latest generation of CCD laser displacement sensors, the LK-G3000. During rail inspection, a carriage moves along the end of a rail at a rate of 3 meters per second and over a distance of 3.2 m. The carriage is equipped with two LK-G displacement sensors that profiles the rails surface at a rate of 10,000 samples per second. If the rail is not straight, it is transferred to a press to be straightened to the desired tolerance. Measurements are extremely fast and the accuracy achieved is in the order of a few hundredths of a millimeter.

“We’ve been working with KEYENCE for many years. We looked around for an alternative supplier, but none of the systems we saw suited us,” says Michel André, automated systems manager at Tata Steel Rail France in Hayange, France.

“Rail surfaces are amongst the most complex to measure and are known to interfere with measurements,” says IT Officer Eric Perruzza. “They are shiny and can be mottled with rust, which is dull. As a result, a sensor will tend to feed back too many incorrect measurements, making it impossible to inspect straightness.”

“We have designed a computerized measurement archival and reprocessing system that allows us to accurately estimate repeatability. With KEYENCE, we achieve a satisfactory rate of correct measurements that is well over what the competition offers.”

KEYENCE’s integration support was also a deciding factor: “This type of system is always hard to implement in conditions such as ours. KEYENCE was the only company able to quickly provide us with technical solutions to our problems.”

Indeed, Tata Steel needed a laser sensor that could meet a number of high requirements: be able to adjust itself to shiny and dull rail surfaces, take measurements very quickly to keep up with fast production rates and withstand harsh operating conditions. 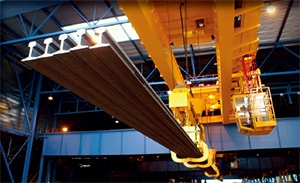 To ensure repeatability of the measurements, KEYENCE developed a number of algorithms to guarantee measurement stability. The ABLE function detects the condition of the surface being scanned and by intelligently controlling laser emission time, laser power and gain, accurately measures even with highly varied surface conditions, such as steel. In addition, the MRC algorithm eliminates multiple reflections from metal surfaces. When two or more peaks are generated by multiple reflections, the algorithm compares the waveforms to the most recent-received light waveform and determines the one that most closely resembles the “correct waveform”. 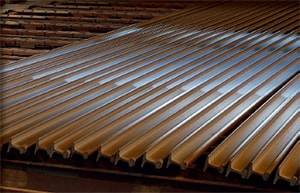 The Li-CCD outputs the light reflected by each pixel, enabling higher accuracy and reducing errors in pixel edges. The processor, which is integrated in the sensor head, digitizes all signals sent to the controller, dramatically reducing disturbance noise. A highly rigid die-cast body is used to reduce deviations caused by temperature changes while the Li-CCD, with 10 times better sensitivity than conventional models, is used to reduce signal noise. The sensor’s novel design has allowed it to achieve an accuracy that is 20 times better than conventional models. Lastly, the LK sensor is protected inside an IP67 rated enclosure that withstands impacts and high temperatures that are common in steel mills. 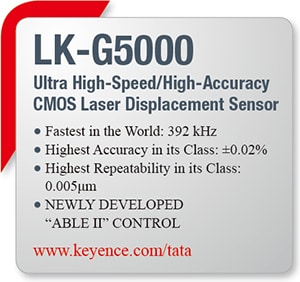