This section introduces Poisson’s ratio and stress so as to explain “strain” in terms of strain measurement.

“Strain gauge”—this beginner’s guide introduces measurement techniques using a strain gauge!
This guide explains strain measurement—from basic knowledge to practical implementation and techniques—in a manner that is easy to understand even for beginners.
Get the PDF for more details

The topic of “strain” (ε) always comes up when considering the strength and structure of a product. 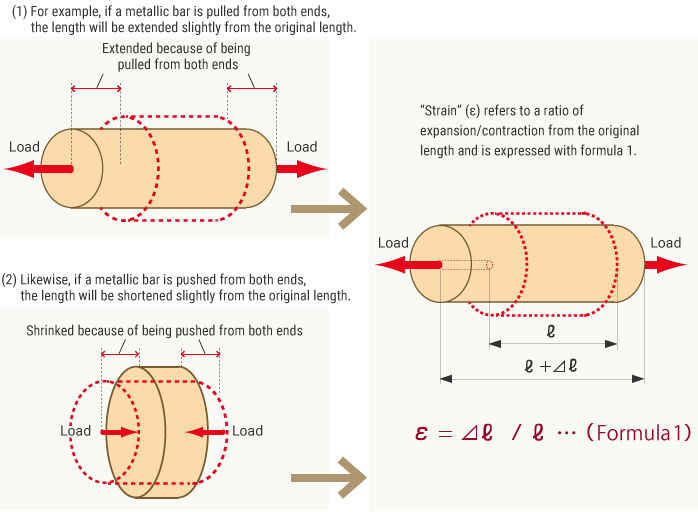 There is no unit for strain because it represents an expansion (contraction) as a ratio. In other words, it is treated as a “unitless” number. However, to indicate that “a given number represents a strain,” “ST” (an abbreviation of strain) or “ε” (because strain is generally represented by the Greek letter ε) is appended after the number. (This is the same way of thinking that is used with “%” and “ppm.”)Because strain represents a small value, micro strain is expressed with the prefix “μ” (micro, 1 × 10−6) as in “μST” or “με.”

1) Longitudinal strain is a ratio in the direction of expansion (contraction) of an object. 2) Lateral strain is a ratio of the change in the diameter direction. 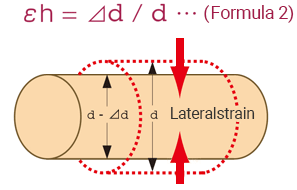 The ratio between longitudinal and lateral strains is called the “Poisson’s ratio,” and general metallic materials have a ratio around 0.3.

Strain also has a direction and the plus or minus sign is attached to express the direction of expansion or contraction.
Pulling (expansion): plus, contraction: minus

Relationship between stress and strain

The relationship between stress and strain has been obtained experimentally.

Let’s take a metallic bar as an example. If it is bent only slightly, the bar will return to the original straight state. However, if the bar is bent forcefully, it will not return to the original state but will remain bent. The amount of bending (strain amount) that allows for a return to the original state is called the “elastic region” and the region above it is called the “plastic region.” In the elastic region, there is a linear relationship between stress and strain, which is known as “Young’s modulus” or the “modulus of longitudinal elasticity” and is generally expressed as “E.”
Once Young’s modulus (the modulus of longitudinal elasticity) is known, you can calculate the stress from the strain amount.

Let’s obtain the stress (the applied force) from the strain amount.

Let’s obtain the stress by assuming that a strain of 485 μST has been measured after pulling the steel bar in the figure.

Strain gauges use the principle that the resistance of a metal changes with its expansion/contraction.

With the original resistance as R (σ), the change in the resistance as ΔR (σ), and the strain amount as ε, this principle is expressed as follows.

The constant of proportionality K is called the “gauge factor,” which has been determined on the basis of the metal (alloy) used for the strain gauge. With no load, the resistance of a strain gauge is generally 120 σ. During general strain measurement, the change in the resistance is several σ at most, so you need to take specific measures to achieve accurate strain measurement.

For those who want to learn
more about strain!

This guide summarizes the basics, practical implementation, and techniques of strain measurement!

A guide for measurement techniques using a strain gauge
Download