This section introduces the basics of thermocouples, how to select them, and key points in using them. 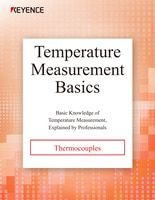 Thermocouples are temperature sensors consisting of two different types of metallic conductors.
Thermocouples, mainly used for industrial applications, have the following features compared to other thermometers (such as mercury thermometers and thermistors). 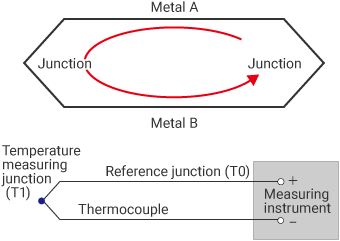 In 1821, a German scientist named Thomas Johann Seebeck discovered that when two different metals are connected and a temperature difference is applied to both junctions, voltage is generated between these metals and current flows.
This phenomenon is named the “Seebeck effect” after its discoverer. This electric power that generates current in a circuit is called thermoelectromotive force and it has been confirmed that its polarity and magnitude are determined only by the materials of the two types of conductors and the temperature difference between both ends.

Measurement methods using an instrument are classified into the two types shown below. 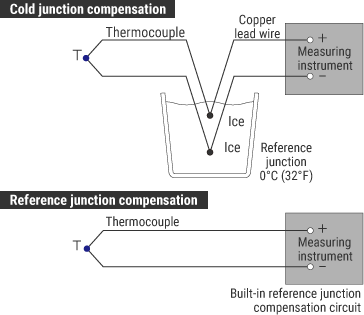 Where is the sensor section of a thermocouple?

Information you should know along with that of thermocouples
Click here for the basic knowledge of temperature recorders.

How to select thermocouples

Selection based on the measurement temperature

The following eight types of thermocouples are available according to the combination of two types of metallic conductors.

Information you should know along with that of thermocouples
Click here for the basic knowledge of temperature recorders.

Selection based on environment-friendliness and responsiveness

The core fibers of a thermocouple are generally shielded from outside air to ensure resistance to oxidation and durability in corrosive environments.
A thermocouple in which the area between its metallic sheath and a pair of thermocouple core fibers has been filled with a powdery inorganic insulation is called a “sheath-type thermocouple.” 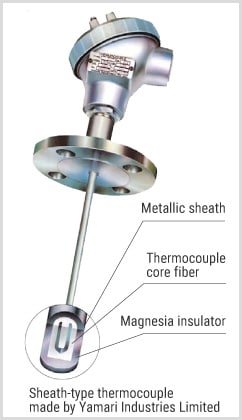 Due to the above features, the use of these thermocouples has been expanded gradually since they were put into practical use more than 10 years ago.

Select the ideal junction type according to your application.

Grounded
A sheath-type thermocouple whose measuring junction has been created by welding its core fibers directly to the tip of the sheath. This type features a quick responsiveness but cannot be used in noisy or hazardous locations because the core fibers are grounded to the sheath.

Non-grounded
A sheath-type thermocouple whose measuring junction has been created with its core fibers insulated from the sheath. Although it has a lower responsiveness than the grounded type, this type can endure long-time use and can be used even in noisy or hazardous locations without being affected.

Exposed
A sheath-type thermocouple whose measuring junction has been created with its core fibers exposed from the sheath. This type has the highest responsiveness among the three types and follows even a slight temperature change. This type is used when a quick responsiveness is required, such as during engine testing, but is basically disposed of after use due to its extremely low strength.

What are compensation lead wires?

Compensation lead wires refer to conductors used to connect thermocouples and temperature measuring instruments.
As they have an almost equivalent thermoelectromotive force characteristic to that of thermocouples in their operating temperature range (0°C to +60°C/32°F to +140°F), they are mainly used to extend thermocouples.

Why must compensation lead wires be used to extend thermocouples?

If a copper lead wire, instead of a compensation lead wire, is used as shown above, no thermoelectromotive force is generated even on a section with a temperature gradient. This issue generates an error in the results of the temperature measurement.

May copper lead wires be used if there is no temperature gradient?

For a connection between a thermocouple and a compensation lead wire, a general terminal block may be used without any problems on the condition that there is no temperature gradient in the connecting section. However, it becomes impossible to perform an accurate measurement if a temperature difference occurs. In this case, use a dedicated connector that has a thermoelectromotive force characteristic that is equivalent to that of the relevant thermocouple.

Thermocouples can be used even after being extended by 1 km or more. However, instruments generally have a specific “input signal resistance,” that is, the maximum resistance of input signals that can be wired. Note that accurate measurement becomes impossible if the total resistance value of the thermocouples exceeds this value.

Calibration of thermocouples refers to the operation that determines the relationship between the value indicated by the thermocouple being used and the true temperature. In general, calibration is performed once every half a year. Methods of calibration are largely classified into the fixed point method and the comparison method.

The triple point of water is the temperature at which gas, liquid, and solid coexist, and is generally realized by a glass cell called the triple-point cell of water.
This point is often used for the fixed point method as it gives the best accuracy of ±0.001°C (±0.0018°F).

Although the accuracy is lower than the fixed point method, this method allows for calibration at an optional temperature.

Instead of a compensation lead wire, a copper or other lead wire is used

In cases where there is a temperature gradient, use of a lead wire made of copper or a similar material, instead of using a compensation lead wire, prevents accurate measurement.
The result of such a lead wire results in a total thermoelectromotive force of 11.00 mV, thereby causing the instrument to show the wrong temperature.

Different types of thermocouple and compensation lead wire are used

Use of a thermocouple and a compensation lead wire whose types are different from that of the instrument prevents accurate measurement.
Usage of these mismatched types results in a total thermoelectromotive force of 7.50 mV, thereby causing the instrument to show the wrong temperature.