Elimination of Autofluorescence Blurring in Plants

Autofluorescence is the natural emission of light called photoluminescence (PL) caused by certain cell structures and properties. When an object receives light, its molecules absorb photons (light), exciting the electrons. Photoluminescence is light emission that occurs as the electrons return to a lower energy state. Autofluorescence is present when cell organelles such as mitochondria and lysosomes, or components of the extracellular matrix such as collagen and elastin, or isoalloxazine ring flavin-containing compounds such as NADH and riboflavin naturally emit excitation light. Among plant cells, chlorophyll, a green pigment used in photosynthesis, and lignin that fills the cell walls are typical examples of elements that exhibit autofluorescence.

Challenges due to autofluorescence when observing plants and their solutions

Problems in fluorescence observation of plants

Challenges and needs in plant observation

Eliminating autofluorescence-derived blurring using a filter requires time and effort to identify the autofluorescence wavelengths to be eliminated and the filters that correspond to them. When observing a plant’s intracellular structures, in some cases you might prepare specimens by dissecting organs and thinly slicing tissues into sections. Specimen preparation such as this requires advanced technical skills and experience. Additionally, the application of mechanical force on the plant while preparing sections poses a concern for causing unintended reactions.
Conventionally, it is also difficult to analyze and evaluate intrinsically three-dimensional structures from two-dimensional images of tissue sections. In short, the two major challenges and needs in the study of plants are to be able to selectively observe the target cells and tissues with clear, fluorescence blur-free images and to be able to accurately and efficiently observe three-dimensional structures.

Our latest fluorescence microscope can provide clear images with no fluorescence blurring caused by autofluorescence, and can also easily and quicky respond to different requirements and needs, such as three-dimensional observations. The following explains how this is achieved using an example of observation images of a potato plant as a case study.

KEYENCE’s BZ-X800 All-in-One Fluorescence Microscope is equipped with the Sectioning function, which helps eliminate fluorescence blurring optically without the use of lasers and easily captures clear images.
The Sectioning function uses the optical sectioning algorithm* to eliminate fluorescence blurring, which leaves only clear fluorescence from the focal point position, allowing for quick and easy acquisition of clear images. Additionally, by capturing multiple images in the Z direction while using the Sectioning function, the BZ-X800 can accurately pick up only the fluorescence signals without being affected by fluorescence blurring at all heights over the entire depth of the specimen. Of those multiple images, the BZ-X800 singles out and combines only the areas that are at their sharpest focus, and uses them to create a fully focused image. This saves operators the time and labor needed to find the right filter in a conventional filter set that will eliminate the wavelength and brings them directly to a clear image for observation. 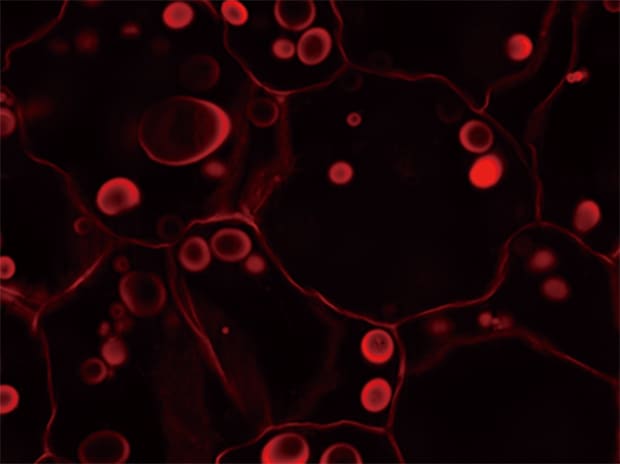 * The Optical Sectioning Algorithm uses structured illumination to section the areas of analyses (z-sectioning) when extracting only signals from the focused surfaces. Excitation light from a metal halide lamp that has a wide wavelength range from UV to near infrared is passed through an electronic projection element, which projects the light in a grid pattern onto the specimen (structured illumination). The grid is only projected onto the focused areas of the specimen. The BZ-X800 captures multiple images while moving the grid in the Z-direction, and by extracting only the areas onto which the grid is projected on from these images, prevents the effect of fluorescence blurring in the vertical direction. This algorithm automatically produces clear images selectively made up of only the signals of focused areas. 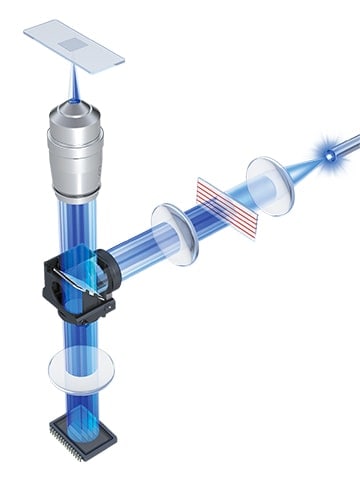 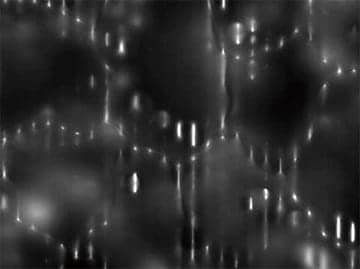 Grid moved in the Z-axis direction 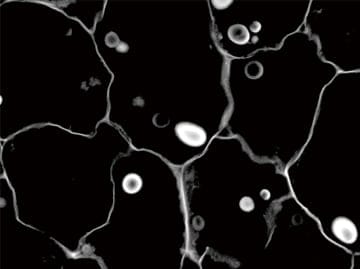 Conventionally, it is difficult to analyze and evaluate three-dimensional tissue structures only using several two-dimensional images from multiple cross-section samples.
With the BZ-X800, you only need a single click to construct a 3D image from Z-stacked images captured at different points on the Z axis at a constant pitch. Additionally, users can rotate, zoom in or out, and observe cross-sections of the 3D image with just mouse actions while looking at the monitor.
3D images are all fully in focus regardless of angle, supporting accurate understanding of localized fluorescence signals however you move the mouse—you will never lose sight of your target cells or tissues. 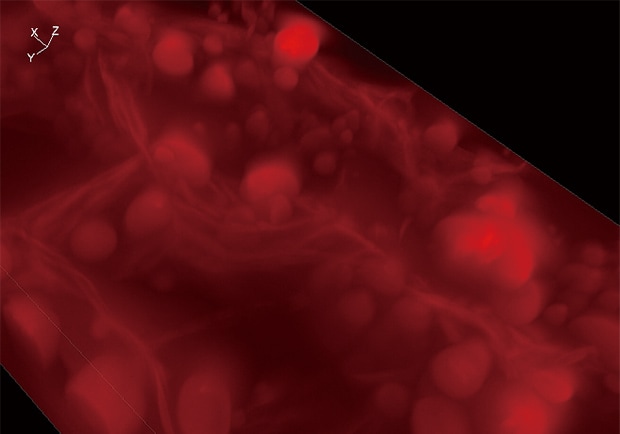 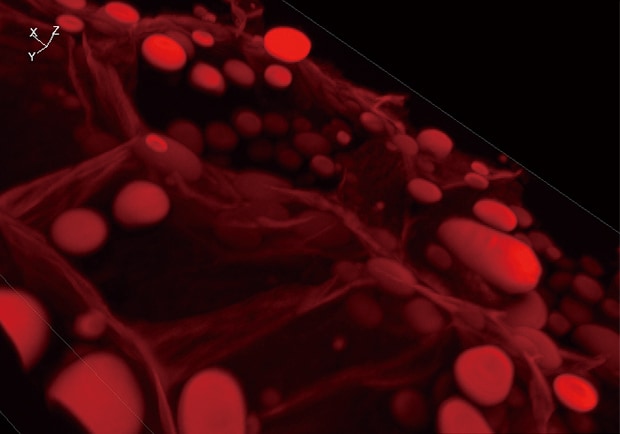