Acceleration sensors are designed to measure changes in speed over one second. Then, the magnitude of vibration is obtained from the acceleration. This section explains the basics of acceleration, including its concept and unit of measurement. 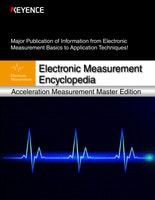 “Acceleration” is a rate of change in speed per unit of time.

In the above figure, the acceleration is 10 m/s2 because the speed changes by 10 m/s in one second.

The following three units are used in general.

Relationships between acceleration, speed, and displacement

The following correlations exist between acceleration, speed, and displacement.

For those who want to learn
more about acceleration!

This guide provides a thorough explanation of tips for measurement using an acceleration sensor. This reference uses diagrams to provide easy-to-understand explanations of fail-proof techniques and key points.