An alveolus is a small bubble-like tissue found in the lung. The alveolus consists of an alveolar space that contains gases and alveolar cells surrounding it. Alveolar cells can be classified into two types, type I alveolar cells and type II alveolar cells. While type I exchanges gases such as oxygen in the alveolus and carbon dioxide in the blood, type II produces and secretes pulmonary surfactant that reduces the surface tension, maintaining the spherical form of the alveolus. 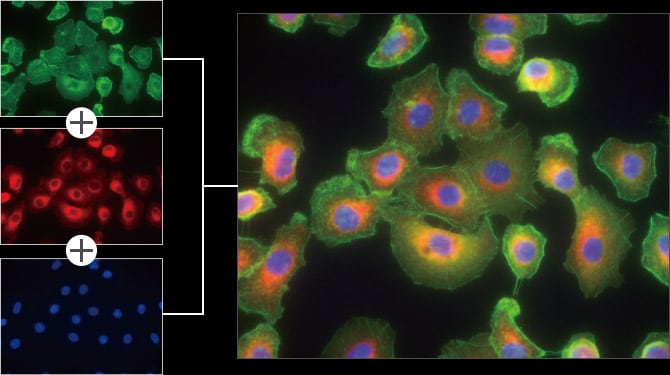 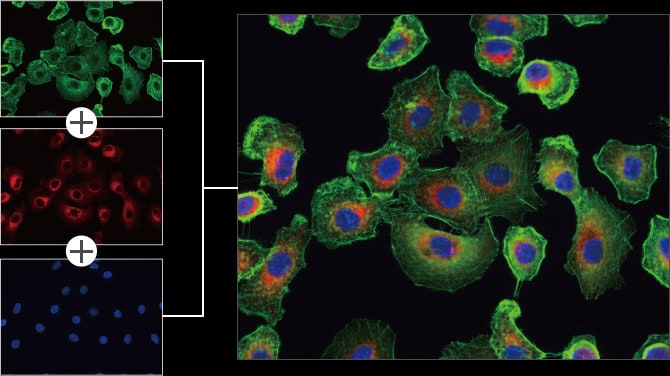 Parameters, such as exposure time, can be adjusted while overlaying images in real-time on a single screen. It is no longer necessary to capture images again to check the overlay image. In addition, because capturing conditions, such as the exposure time and camera gain for each channel, are individually saved in memory, it is possible to adjust only a specific channel again after overlaying.

Once you have the BZ-X:

When observing multi-dyed cells, images from up to four fluorescent channels can be overlaid to create one overlay image.

Multiple images are captured in the Z direction for each channel and only in-focus areas in the captured images are combined. By doing this, it is possible to create an overlay image that is fully focused over the entire specimen.

In addition to a fully-focused image, a high resolution 3D overlay image can be created.
Localization in the Z direction can clearly be observed.