Gamma Aerospace LLC produces big parts: stringers and struts, doors and access panels, seat tracks, spars, and more, some longer than a pickup truck. In fact, if it’s used to construct a commercial airliner, helicopter, or military aircraft, chances are good that it came from Gamma.

But the Mansfield, Texas manufacturer makes plenty of small parts as well—the brackets and fittings, for example, that are needed to assemble larger structural components into a functioning aircraft. This product diversity was the problem facing Gamma’s director of quality and operations, Jason Jackson: how to measure the miniature, in a shop geared towards the macro?

“Our digital inspection area has an array of measuring equipment including coordinate measuring machines (CMMs) and portable inspection arms, but even our smallest CMM has an 8-foot bed, and the arm has a 6-foot inspection envelope,” he says. “These are fine for our larger parts, but we also machine an awful lot of small, tight-tolerance parts. We found it time-consuming and a little awkward to setup a humungous measuring machine for parts that you can hold in your hand.”

One of these was a triangular, two-inch long metal clip destined for Lockheed’s F-35 fighter jet, which Gamma machines in quantities of 300 of parts per month. Until recently, one of Jackson’s team members would inspect a representative sample of each production lot on one of the CMMs, but because the parts would later be cadmium plated, it was necessary to 100% inspect each of the part’s three close-tolerance holes, verifying they would meet post-plating tolerance requirements.

“The CMM part of the inspection process wasn’t super long, maybe 10 minutes or so, but we had to use an inside micrometer to check all the holes,” Jackson explains. “Think about hand-checking three-hundred parts times three holes each—that’s 900 holes per job. That’s what got me thinking about The KEYENCE optical comparator.”

Jackson is a chemist by trade. He’d used the inspection equipment provider’s digital microscopes in the past, and says “he loves KEYENCE equipment.” So, when he was approached by the local system specialist about the company’s IM Series Instant Measurement System, the next-generation, automated optical comparator, Jackson welcomed him in for a demonstration. 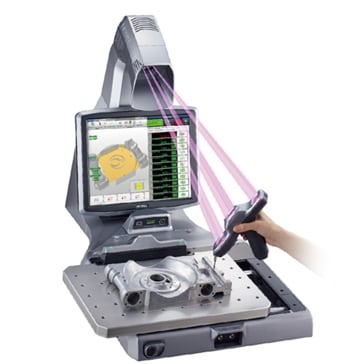 There’s more to this story than finding an efficient way to check small parts, however. Jackson was also plagued with a problem that virtually all manufacturing companies can relate to: finding qualified people—in his case, inspectors. Fortunately, he soon discovered a way to address both of these issues.

Since 1971, Gamma Aerospace has made a name for itself as a leader in aerospace component manufacturing. With extensive machining capabilities as well as proficiency in deep drawing, forming, bending, and assembly, the company has attracted customers such as Boeing, Bell Helicopter, Spirit AeroSystems, and others.

Once a family-owned company, Gamma was acquired by the Chicago-based private investment firm, Ashland Capital Partners, in March of 2017. Since then, the company has invested heavily in new equipment and manufacturing technology, and during a board meeting late last year to review department needs, Jackson was asked to define his biggest hurdle going forward.

“Though we had some great equipment at our disposal, we were definitely lacking the right tools to measure the smaller parts,” he says. “But even if we’d had those tools, our biggest bottleneck was a lack of skilled inspectors. So, when the board asked me what I was going to do to resolve the situation, I told them about the KEYENCE equipment, explaining that it would not only solve our small parts challenges, but was easy enough to use that we could leverage less experienced people to operate it.”

The board’s response: “Why haven’t you bought it yet?” Jackson took the board’s approval and ran with it. He ordered a KEYENCE IM Series Instant Measurement System as well as the XM Series Handheld CMM for easy 3D and GD&T measurement. By early 2019, they were busy measuring parts with both. For the triangular clip mentioned earlier, he says the IM is not only significantly faster than the previous inspection method, but much more accurate as well.

“We can check a complete part in just a couple minutes now, and measuring the holes literally takes just a few seconds,” he says. “There’s no need to align the part, no fixture, we just set the part or even multiple parts on the stage and push the button. The KEYENCE optical comparator goes out and finds whatever’s on the stage, identifies a pre-defined key feature, electronically orients the part, and gets measuring. The dimensions are recorded automatically, and as long as you can tell the difference between a green light and a red one, anyone can operate it.”

The team has programmed dozens of other parts since the IM and XM’s arrival. Since the KEYENCE units are so easy to use, Jackson was able to transfer one of Gamma’s CNC machine operators from the shop floor to quality control to begin training him as an inspector; while the would-be QC technician operates the inspection systems, his more experienced colleagues are now free to work on the shop’s larger parts.

“The programming is super easy, the software has a bunch of different measuring routines, and there’s even an import function, so we can pull in CAD files and use them as a starting point,” he says. “For this workpiece in particular, it’s been a huge improvement, but The KEYENCE optical comparator and CMM units quite simply rock. To be honest, I was a little worried at first about throwing new technology into our equipment mix, especially considering how much we’ve always relied on our conventional CMMs, but everyone in the department took right to it. Now they just love KEYENCE.”