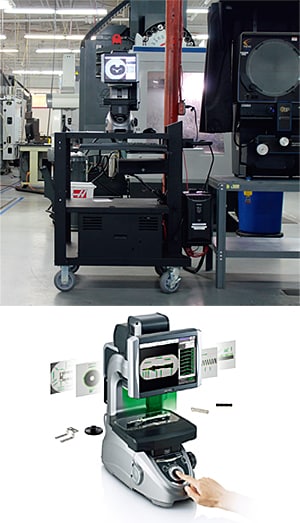 Kevin Botta, Continuous Improvement Manager at Orchid Orthopedic Solutions Inc., has been having a hard time keeping people out of the Quality Inspection lab. “I've had to chase people out of here because they want to measure everything with the new equipment,” says Botta. “It's amazing how much faster it is than our legacy inspection methods.”

He's talking about the IM, or “Instant Measurement” systems Orchid purchased recently to increase inspection throughput on the small, tight-tolerance components machined at the company's Arab, Alabama facility. With the ability to simultaneously measure up to 99 dimensions, and do so in less than 3 seconds, the Instant Measurement gives Orchid employees a tremendous increase in the speed and efficiency at which they can measure parts.

It's a good thing the company bought three of the units; otherwise Quality Control would really have their hands full.

Orchid is a world leader in the design and manufacture of life changing—and life saving—orthopedic implants, surgical instruments, and other medical devices. The company's mission statement is “To provide an opportunity for people to live a better life.”

That mission pertains to everyone the company touches — the patients treated with Orchid products, the surgeons who use them, their OEM customers, and the employees who make and market a diverse range of spinal screws, fusion cages, fixation plates, hip and femoral stems, as well as the instruments needed to install those components in the human body.

Considering what's at stake, the company has a strong emphasis on quality, and is registered with the FDA. This is at least part of the reason it partnered with KEYENCE, as it needed a reliable method of measuring together with a metrology partner that would stand behind its products. Botta—a self-avowed CMM junkie—says he's been monitoring vision measurement technology for the past decade, and made the final decision to go with KEYENCE during a visit to the 2014 IMTS show.

“I spent an entire day cruising the Metrology hall at McCormick Place. Compared to the other brands, the KEYENCE has easily twice the measurement accuracy and repeatability. It has the largest measurement stage for “field of view” technology. Also, there are some really neat things about the IM. It has a wideangle double telecentric lens, so it eliminates the curve you sometimes get when checking a part on an optical comparator. And the programmable ring illumination takes care of any potential lighting problems.”

Before signing on the dotted line, Orchid sent a test part to KEYENCE a geared component Orchid was making for a customer in Italy and had previously had trouble getting repeatable inspection results. The Instant Measurement had no problem measuring the spline gear's pitch, major, and minor diameters, the tooth angle and form, and concentricity, a tall order for many inspection machines. Based on these results, Orchid placed the order for three IM-6225 “Place-and-Press” Image Dimension Measuring Systems.

“When the machines arrived—and after they were FDA validated— the opportunity to implement this technology exploded,” he says. “Quality planning was asking if we could inspect anything from milled parts to dimensions on laser marking. Our first real big savings happened when the technicians in the lab figured out they could measure multiple parts at a time. The Friday before, our Quality Manager Scott Steelman spent twelve hours measuring a lot of 200 parts. A week later, we programmed the same job on the KEYENCE system and were able to measure the same 200 parts within 30 minutes. We learned to program and use the machines in only a few short hours.”

The news has spread. Botta says he's been kept busy doing test measurements and pushing the envelope of the system.
“Orchid has purchased some battery-powered carts and made the Instant Measurement mobile. We have integrated the wireless bridge with a mobile power cart solution to optimize the systems mobility on the manufacturing floor. We worked with the KEYENCE support staff and our I.T. Department to make this work. KEYENCE's support level has been phenomenal. We are able to download part programs and CAD files to the machine, and upload measurement results back to the file server. It's going to make life very simple for the people on the shop floor.”