What is a laser?

Let's take a closer look at these features.

Monochromaticity simply means the light waves in a laser beam are all the same color. Ordinary light, such as the light from a fluorescent bulb, is generally a mixture of several colors that combine and appear white as a result.

Directivity simply means that the component light waves travel together in a straight line without really spreading apart.

What is the difference between YVO4 lasers and CO2 lasers?

A laser's principle medium often determines what applications that laser can perform. Here's a brief description of various laser markers and their typical applications.

CO2 Laser Marker (Wavelength: 10600 nm)
Often used to mark paper, plastic, glass and ceramic
Can be used for film marking applications since the wavelength is absorbed by transparent materials
High-powered models can perform gate cutting and PET sheet cutting
YVO4 Laser Marker/Fiber Laser Marker (Wavelength: 1064 nm)
These are some of the most versatile laser markers. 1064 nm light is considered the "standard" wavelength and can be used to mark a wide range of materials, from resins to metals. However, marking on transparent materials is not possible with standard wavelength laser markers.

The following chart lists the various classifications of lasers and the precautions that users should take when operating each type.

What is the principle behind laser markers?

Laser markers use mirrors to scan a focused beam of high-energy light across the surface of a part. Almost any marking pattern is possible, from characters to 2D codes to logos.

Laser markers require minimal maintenance and don't use consumables such as ink and solvent. Their marks are also permanent, making them the ideal system for many marking applications.

Yes, depending on the laser's wavelength and the type of material being marked.

Since lasers physically process a target by engraving it, etching it or changing its color, laser marking can be semi-permanent.

Are any targets incompatible with larger marking?

In principle, any material can be laser marked. However, some materials cannot be marked by certain wavelengths. Therefore, it’s vital to understand how different materials react with laser light in order to choose the right system for your application.

These materials absorb almost zero CO2 laser light, which makes them very difficult to mark with a CO2 laser. YVO4, fiber, and hybrid laser markers are better at marking these materials.

The wavelength of YVO4 /Fiber Laser Markers passes through transparent objects, making marking impossible.
For marking on a transparent surface, use a CO2 or UV laser marker.

Laser marking to produce color is commonly accomplished by:

When laser light generates bubbles on a material through heat. Gas from the bubbles is trapped under the surface layer of the material, which then swells with a white color. Specifically, dark base colors becomes lighter, resulting in high visibility (e.g. red turns pink).

When dye ingredients contained in a base material absorb laser energy, the molecular density of the dye increases. This causes the dye to condense and become a darker color. 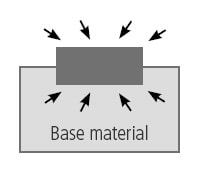 When polymer material around a dye is carbonized and turns black (as a result of continuous laser emission). 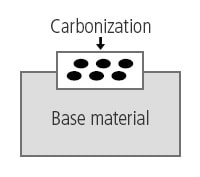 Metal ions are contained in the dye ingredients of a base material. Laser light can chemically change the crystalline structure of metal ions and the hydration level in the crystal composition of the ingredients. AS a result, the dye concentration increases and coloration occurs.

What are the operating costs?

In principle, no operating costs are required except for daily electricity costs. Laser markers require zero consumables and have a much longer working life compared to conventional marking systems.

You should not look directly at laser light, right? 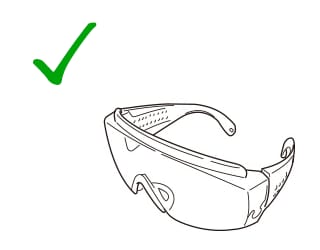 What does “marking space” mean?

The laser's focal distance can be freely adjusted within the marking space. 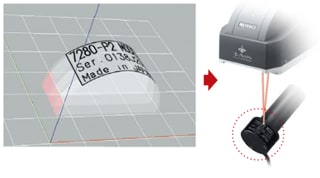 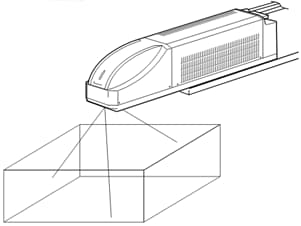 How do laser markers create a printed image?

Laser markers use mirrors to scan a focused beam of high-energy light across the surface of a part. Almost any marking pattern is possible, from characters to 2D codes to logos.

What industries use laser markers?

Laser markers were traditionally used for electrical products, electronic components and metal parts. Today, laser markers have expanded to most industries including medical, automotive, and food/pack.

What systems are better at marking on preprinted boxes: laser markers or inkjet printers?

One of a laser marker's strongest features is the ability to print images that are basically permanent.

Since laser markers physically process a target object, the printed image can't be removed or washed away. This has made laser marker security applications (preventing falsification) popular in recent years.

What is ‘single mode’ and what advantage does it provide?

The laser's power peak is condensed at the beam’s center. Since the beam prints with many short pulses, it doesn’t apply excessive stress. This allows for an unprecedentedly high level of print clarity. 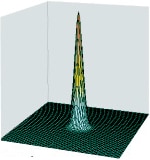 Power peaks are generated at random throughout the beam. Uniform print quality is difficult to achieve with a large number of low-power pulses.

What kind of processes can laser markers perform?

Heating a material above its boiling point to evaporate parts off.

Heating a material above its boiling point to cause fusion.

Heating a material below its boiling point to improve its properties.

While most of KEYENCE’s laser markers are used for marking, a large number are being used for processing applications, such as the ones shown below.

Peak power is the value of a laser’s single-pulse energy divided by its pulse width. It is expressed in watts (W).

Do KEYENCE laser markers operate on an infrared wavelength?

What is the difference between laser 'scanning' and laser 'masking'? 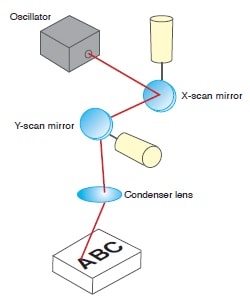 How does a YVO4 laser marker work?

YVO4 stands for yttrium (Y) vanadate (VO4; vanadium tetroxide). YVO4 lasers use Nd (neodymium) and a crystal as the laser medium. Using a lamp or laser diode (LD) as the light source, they shine a fixed wavelength of light on the YVO4 crystal to generate a 1,064 nm beam—the YVO4 laser itself. In the past, YAG (yttrium aluminum garnet) was often used as the medium for oscillating 1,064 nm lasers instead of YVO4 crystals. This category of lasers is known as YAG lasers.

What is a semiconductor laser?

In short, a laser made using semiconductor material. The activation layer between the p-n junctions generates light when p-side holes combine with n-side electrons. 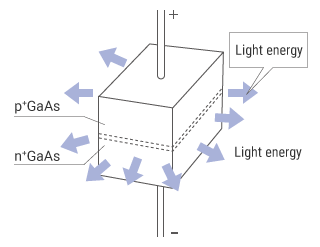 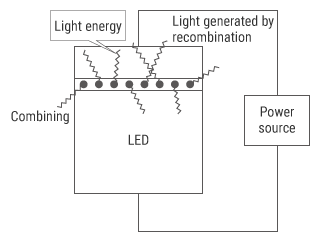 A semiconductor laser's structure is very similar to that of a diode laser. The only difference is the use of GaAs as the host, in which the energy takes the form of light instead of heat, and changes the diode into an LED (light-emitting diode).

The semiconductor's crystal (activation layer) amplifies the light and is structured to prevent it from leaking out. Semiconductor lasers are generally used for communications, optical disks, and laser excitation sources.

What is a 3-axis control laser? 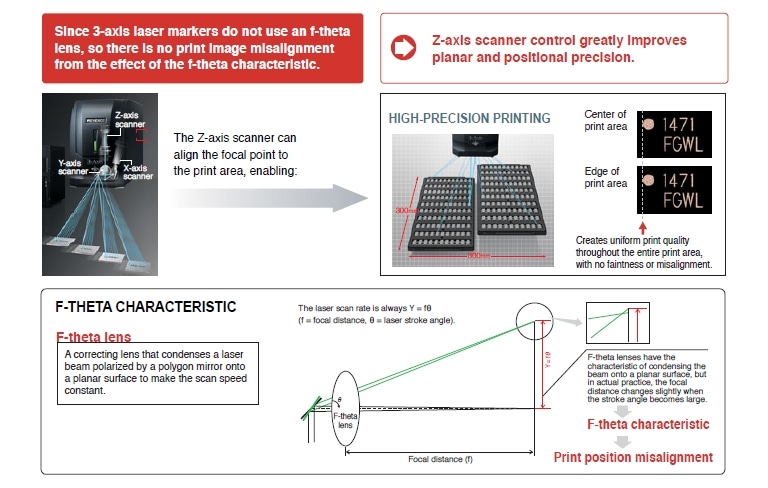