What is Laser Tracker?

A laser tracker is a measuring device that projects a laser beam onto an optical target that is in contact with an object to be measured, and determines the three-dimensional position of the target. The optical targets known as “retroreflective” because they reflect the laser beam back to its emitted origin point – typically known as a spherically mounted retroreflector (SMR). Dimension values, angles, geometrical tolerances, etc. are determined by software that calculates the 3D coordinates of the retroreflector.

Laser trackers are characterized by the ability to measure large objects. Laser trackers generally have a measuring range of more than 10 m (30 ft), whereas a standard arm-type CMM has a maximum measuring range of a couple meters. It is useful in situations where you want to measure large objects such as large measurement objects such as airplanes, parts of large equipment, and parts produced by double-column, 5-face milling machines.

The components that make up a laser tracker are generally divided into four parts.
A PC to run laser tracker operation software, a camera body that integrates a light emitting unit and a light receiving unit, a tripod that supports it, a retroreflector (SMR) that contacts the object to be measured.

Principle of a Laser Tracker

The advantage of the laser tracker is that it can measure large objects in three dimensions. An arm-type CMM has a limited measuring range, and when using a hand tool such as a caliper or a tape measure, three-dimensional measurements and accuracy can be difficult to achieve. Laser trackers are used in such situations.

X,Y,Z Coordinate of the holes 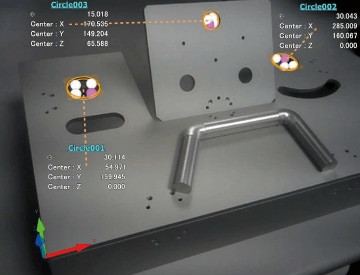 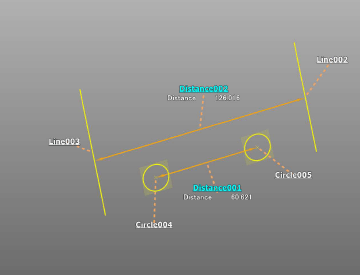 Flatness of a plane, Roundness of holes, Parallelism of 2 lines, Perpendicularity of 2 lines KEYENCE's WM Series is a completely new measuring instrument that overcomes the obstacles of conventional laser trackers in terms of usability, cost and portability.
The portable system allows for immediate measurement with a handheld probe equipped with a touch panel designed for ease-of-use and accuracy over a wide area. Learn more about this next-generation laser tracker.